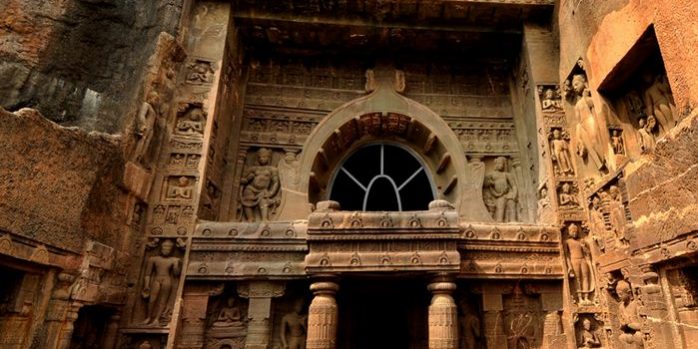 Ajanta, Ellora Caves one of the most visited places in Maharashtra. Beginning with the 2nd century B.C., and continuing into the 6th century A.D., the paintings and sculptures in the caves of Ajanta and Ellora, inspired by Buddhism and its compassionate ethos, unleashed a surge of artistic excellence unmatched in human history. These Buddhist and Jain caves are ornately carved, yet seem quiet and meditative and exude a divine energy and power.About 107 km from the city of Aurangabad in Maharashtra, are the rock-out caves of Ajanta nestled in a panoramic gorge, in the form of a gigantic horseshoe. A set of 29 caves, Ajanta is among the finest examples of some of the earliest Buddhist architecture, cave paintings and sculptures. These caves comprise Chaitya halls or shrines, dedicated to Lord Buddha and Viharas or monasteries, used by Buddhist monks for meditation and the study of Buddhist teachings. The paintings that adorn the walls and ceilings of the caves depict incidents from the life of lord Buddha and various Buddhist divinities. Among the most interesting paintings are the Jataka tales, illustrating diverse stories relating to the previous incarnations of the Buddha as Bodhisattava, a saintly being who is destined to become the Buddha. These elaborate sculptures and paintings stand in impressive grandeur in spite of withstanding the ravages of time. Amid the beautiful images and paintings are sculptures of Buddha, calm and serene in contemplation.

The cave temples and monasteries at Ellora, excavated out of the vertical face of an escarpment, are 26 km north of Aurangabad. Sculptors, inspired by Buddhism, Jainism and Hinduism, created elaborate rock carvings. Extending in a linear arrangement, the 34 caves contain Buddhist Chaityas or halls of worship, Viharas or monasteries and Hindu and Jain temples. Spanning a period of about 600 years between the 5th and 11th century A.D., the earliest excavation here is of the Dhumar Lena (Cave 29). The most imposing excavation is, without doubt, that of the magnificent Kailasa Temple (Cave 16) which is the largest monolithic structure in the world. Known as Verul in ancient times, it has continuously attracted pilgrims through the centuries to the present day.

Declared as World Heritage Sites by UNESCO since 1983, the paintings and sculptures of Ajanta and Ellora, considered masterpieces of Buddhist religious art, have had a great influence in the development of art in India. The creative use of colour and freedom of expression used in depicting human and animal forms makes the cave paintings at Ajanta one of the high watermarks of artistic creativity. The Ellora preserved as an artistic legacy that will continue to inspire and enrich the lives of generations to come. Not only is this cave complex a unique artistic creation and an excellent example of technological exploit but also, with its sanctuaries devoted to Buddhism, Hinduism and Jainism, it illustrates the spirit of tolerance that was characteristic of ancient India.