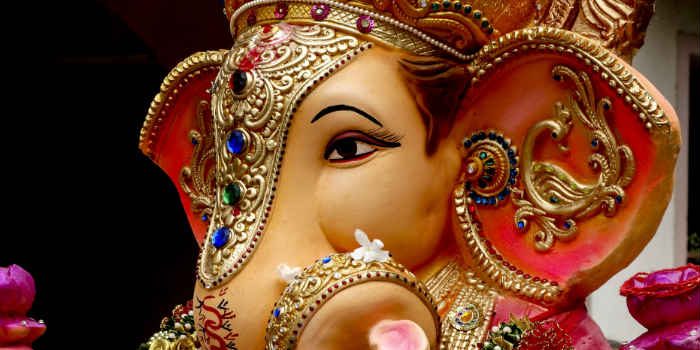 Ganesh Chaturthi is the Hindu festival of Ganesha, the son of Shiva and Parvati, who is believed to bestow his presence on earth for all his devotees in the duration of this festival. It is the birthday of Ganesha who is widely worshipped as the god of wisdom, prosperity and good fortune.

Two to three months prior to Ganesh Chaturthi, artistic clay models of Lord Ganesha are made for sale by specially skilled artisans. They are beautifully decorated & depict Lord Ganesh in various poses. The size of these statues may vary from 3/4th of an inch to over 25 feet.

Ganesh Chaturthi starts with the installation of these Ganesh statues in colorfully decorated homes and specially erected temporary structures mandapas (pandals) in every locality. The pandals are erected by the people or a specific society or locality or group by collecting monetary contributions. The mandapas are decorated specially for the festival, either by using decorative items like flower garlands, lights, etc. or are theme based decorations, which depict religious themes or current events.

For 10 days, from Bhadrapad Shudh Chaturthi to the Ananta Chaturdashi, Ganesha is worshipped. On the 11th day, the statue is taken through the streets in a procession accompanied with dancing, singing, and fanfare to be immersed in a river or the sea symbolizing a ritual see-off of the Lord in his journey towards his abode in Kailash while taking away with him the misfortunes of his devotees, this is the ritual known as Ganesh Visarjan.

Today, the Ganesh Festival is not only a popular festival, it has become a very critical and important economic activity for Maharashtra. Many artists, industries, and businesses survive on this mega-event. Ganesh Festival also provides a stage for budding artists to present their art to the public.