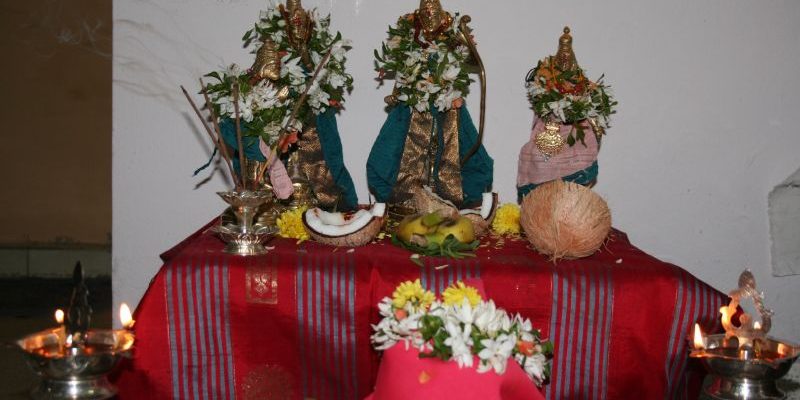 Sri Rama Navami is a Hindu festival, celebrating the birth of Lord Rama to King Dasharatha and Queen Kausalya of Ayodhya. Rama is the 7th incarnation of the Dashavatara of Vishnu. The festival falls in the Shukla Paksha on the Navami, the ninth day of the month of Chaitra in the Hindu calendar. Thus it is also known as Chaitra Masa Suklapaksha Navami, and marks the end of the nine-day Chaitra-Navratri celebrations.

The important celebrations on this day take place at Ayodhya (Uttar Pradesh), Bhadrachalam (Andhra Pradesh) and Rameswaram (Tamil Nadu), thronged by thousands of devotees. Rathayatras, the chariot processions, also known as Shobha yatras of Rama, Sita, Lakshmana and Hanuman, are taken out at several places, including Ayodhya where thousands of people take a dip in the sacred river Sarayu.

SriRama Navami is dedicated to remembering Rama, as the most Supreme with resolute Bhakti (devotion). It occurs on the ninth day, or navami beginning count from the “no moon day” or Amavasya, during the waxing moon duration called “Shukla Paksha”. Sri Rama Navami generally occurs in the months of March and April. Celebrations and festivities begin with prayer to the Surya Deva early in the morning. At midday, when Rama incarnated on that day in Treta Yuga, that duration is special and hence devotional service to him is performed with Bhakti and peity.