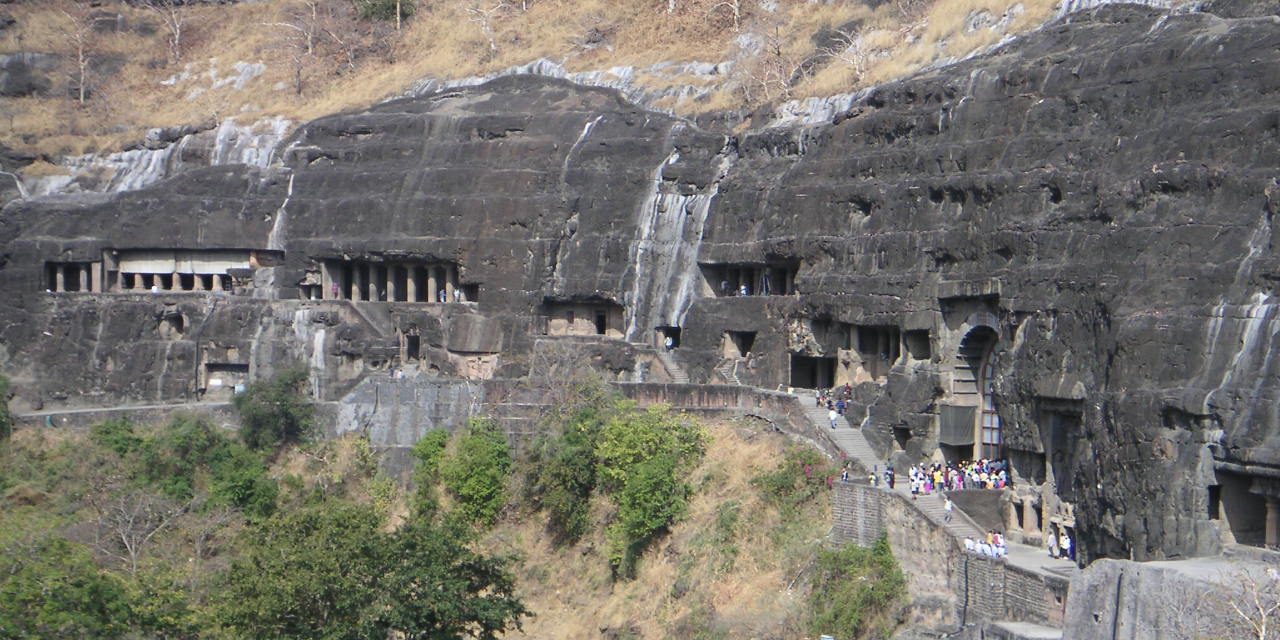 Since 1983, the Ajanta Ellora Caves have been a UNESCO World Heritage Site. The caves are located in the Indian state of Maharashtra.

a British officer for the Madras Presidency, John Smith, while hunting tiger, accidentally discovered the entrance to one of the cave temples (Cave No. 9) deep within the tangled undergrowth. Exploring that first cave, long since a home to nothing more than birds and bats and a lair for other, larger, animals, Captain Smith wrote his name in pencil on one of the walls. Still faintly visible, it records his name and the date, April 1819. Shortly after this discovery, the Ajanta Caves became renowned for their exotic setting, impressive architecture, historic artwork, and long-forgotten history.

Ellora represents the epitome of Indian rock-cut architecture. The 34 “caves” – actually structures excavated out of the vertical face of the Charanandri hills – being Buddhist, Hindu and Jain rock cut temples and monasteries, were built between the 5th century and 10th century. The 12 Buddhist (caves 1–12), 17 Hindu (caves 13–29) and 5 Jain (caves 30–34) caves, built in proximity, demonstrate the religious harmony prevalent during this period of Indian history.

By Air: The easiest but a little expensive Transportation facility to Ajanta and Ellora is the closest airbase from Ajanta which is Aurangabad. Indian airlines along with the Jet Airways have every day air services to Aurangabad from both the metropolitan cities.

Jalgaon, which is closer to Ajanta, is rapidly raising its airport and will be soon prepared to serve travelers visiting the site. However, as of now, Aurangabad which is 99 kilometers from Ajanta and approximately 30 km from Ellora is the ideal base to go to Ajanta and Ellora, being well linked to the significant towns of Delhi, Udaipur, Jaipur, and Mumbai.

By Rail: This is the most convenient way to reach Ajanta and Ellora caves. Jalgaon railway station which is nearly 60 kilometers from Ajanta, is the nearby rail terminal from Ajanta, offering trouble-free transportation entrée from the chief towns of India.
By Road: There are regular state buses that run from Mumbai, Pune, Ahmednagar, Jalgaon, Shirdi, Nasik, Dhule, Ahmedabad, Hyderabad, Indore and Bijapur to Aurangabad, and from Jalgaon to Ajanta. Maharashtra Tourism Development Corporation (M T D C) operates conducted tours from Mumbai to Aurangabad.

9.00AM to 17.30PM Indian Standard Time (IST),
For Indians: Rs. 10/- per head
For Foreigners: US $5 or equivalent in Indian rupees per headNote: Ajanta Caves remain closed on Monday and Ellora Caves remain closed on Tuesday. both caves remain open on all national holidays
Category: World Heritage SitesBy userJune 5, 2016
Share this article
Share on FacebookShare on Facebook TweetShare on Twitter Pin itShare on Pinterest Share on LinkedInShare on LinkedIn Share on WhatsAppShare on WhatsApp