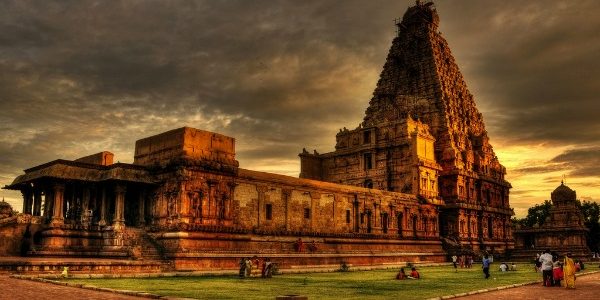 Brihadeeswarar Temple is the world’s first complete granite temple and a brilliant example of the major heights achieved by Cholas kingdom Vishwakarmas in temple architecture. It is a tribute and a reflection of the power of its patron RajaRaja Chola I. It remains as one of the greatest glories of Indian architecture.

The entire temple structure is made out of hard granite stones, a material sparsely available currently in Thanjavur area where the temple is located. the temple had always been serving as a platform for the dancers who excelled in the traditional dance form of Bharatha Natyam. Even today, the Brihadeeswarar Temple remains India’s largest. Brihadishwara Temple also popularly known as the ‘Big Temple’ has turned 1000 years in 2010

This temple is one of India’s most prized architectural sites. The temple stands amidst fortified walls that were probably added in the 16th century. The Vimana – or the temple tower – is 216 ft (66 m) high and is among the tallest of its kind in the world. The Kalash or ‘Chikharam’ (apex or the bulbous structure on the top) of the temple is not carved out of a single stone as widely believed. There is a big statue of Nandi (sacred bull), carved out of a single rock, at the entrance measuring about 16 feet long and 13 feet high. The entire temple structure is made out of hard granite stones, a material sparsely available currently in Thanjavur area where the temple is located.

By Air: The nearest airport is situated at Trichy, 65-km from Thanjavur.
By Rail: The nearest railway station at Thanjavur, is well connected with Trichy, Chennai, and Madurai.
By Road: Thanjavur is well connected by road with all the major towns and cities in Tamil Nadu and also with Kochi, Ernakulam, and Thiruvananthapuram in Kerala and Bangalore in Karnataka
Category: World Heritage SitesBy userJune 5, 2016
Share this article
Share on FacebookShare on Facebook TweetShare on Twitter Pin itShare on Pinterest Share on LinkedInShare on LinkedIn Share on WhatsAppShare on WhatsApp