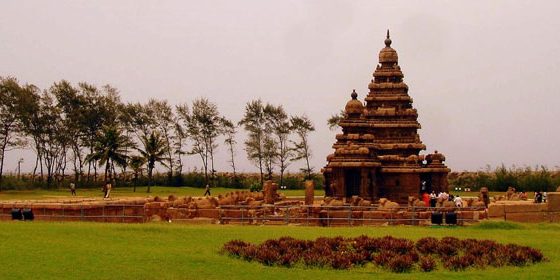 Mahabalipuram was a 7th century port city of the South Indian dynasty of the Pallavas around 60 km south from the city of Chennai in Tamil Nadu.

The monuments are mostly rock-cut and monolithic, and constitute the early stages of Dravidian architecture wherein Buddhist elements of design are prominently visible. They are constituted by cave temples, monolithic rathas (chariots), sculpted reliefs and structural temples. The pillars are of the Dravidian order. The sculptures are excellent examples of Pallava art.

By Air: The nearest airport is the Chennai International airport, which is located about 60 km away from Mahabalipuram. Chennai is well connected to all major cities in India and many cities in abroad including Colombo, Middle East countries, Singapore and Gulf countries.
By Rail: The nearest railway stations are Chengalpattu (29 km) and Chennai (60 km). Chennai being a metropolitan city is well connected by railways to all the major and minor cities in India.
By Road: Mahabalipuram is connected by a number of interconnecting roadways to Chennai, Chengalpattu, Pondicherry and Kanchipuram.
Category: World Heritage SitesBy userJune 5, 2016
Share this article
Share on FacebookShare on Facebook TweetShare on Twitter Pin itShare on Pinterest Share on LinkedInShare on LinkedIn Share on WhatsAppShare on WhatsApp