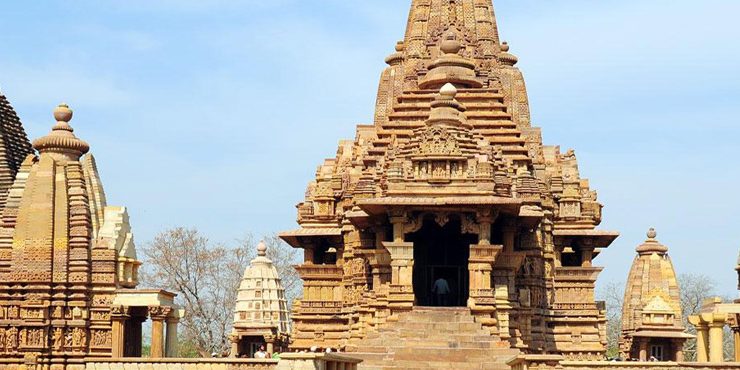 Khajuraho temple complex offers a well made light and sound show every evening. The first show is in English language and the second one in Hindi. The show is about an hour long and covers the history, philosophy and the art of sculpting of these temples. It is held in the open lawns in the temple complex.

By Air: Their are flights operating between Delhi domestic Airport & Khajuraho Airport. Some flights go via Varanasi also. Khajuraho Airport is located at a distance of 06kms from Khajuraho Temples and well linked by road. Upgradation work is going on at Khajuraho Airport to make it International Airport.
By Rail: Most important railway station for Khajuraho is Khajuraho Railway Station which is just 5km from Khajuraho Town. Their is direct train for Khajuraho Railway Station (UP Sampark Kranti Express) for Khajuraho. It is the only train, at present from New Delhi to Khajuraho.
By Road: A good road network connects Khajuraho to nearby cities like Chhatarpur, Mahoba, Harpalpur, Satna, Panna, Jhansi, Gwalior, Agra, Sagar, Jabalpur, Indore, Bhopal, Varanasi and Allahabad.
Category: World Heritage SitesBy userJune 5, 2016
Share this article
Share on FacebookShare on Facebook TweetShare on Twitter Pin itShare on Pinterest Share on LinkedInShare on LinkedIn Share on WhatsAppShare on WhatsApp