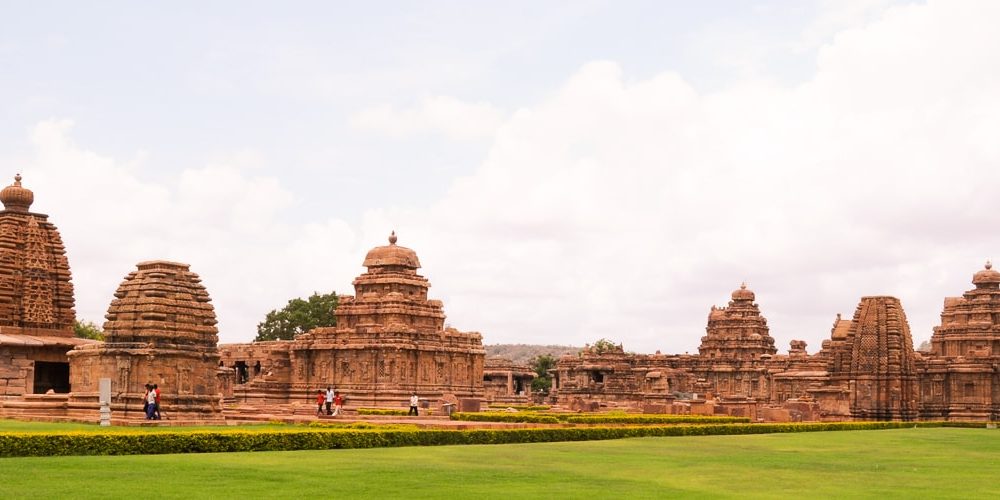 Pattadakallu : The group of monuments in Pattadakal was designated a World Heritage Site in 1987.

Pattadakal, the capital of the Chalukya dynasty of Southern India, who built the temples in the seventh and eighth centuries. There are ten temples including a Jain sanctuary surrounded by numerous small shrines and plinths. Four temples were built in Dravidian style, four in Nagara style of Northern India and the Papanatha temple in mixed style.

Pattadakal is situated on the left bank of the Malaprabha River, the place is situated entirely on the North Karnataka Plateau which is just 22 kms from Badami and about 10 kms from Aihole. Historians believe that Pattadakal was referred to as Petrigal by Ptolemy, Pattadakal was later known variously as Raktapura and Pattadakal Kisuvolal which meant ‘Red Town’ in Kannada.

By Air: The nearest airport is Belgaum about 160 km. Other important airport near Aihole is Bangalore 514 km away and the place is well connected by Indian Airlines flights to most parts of India.
By Rail: The nearest railway station is Badami, 22 km away. There are around five regular trains for Bijapur from Badami.
By Road: The State Highway 14 links Pattadakallu with Badami. Aihole is round 45 km from Pattadakal. The place is connected to other major centers like Bijapur (134 km) by road.
Category: World Heritage SitesBy userJune 5, 2016
Share this article
Share on FacebookShare on Facebook TweetShare on Twitter Pin itShare on Pinterest Share on LinkedInShare on LinkedIn Share on WhatsAppShare on WhatsApp