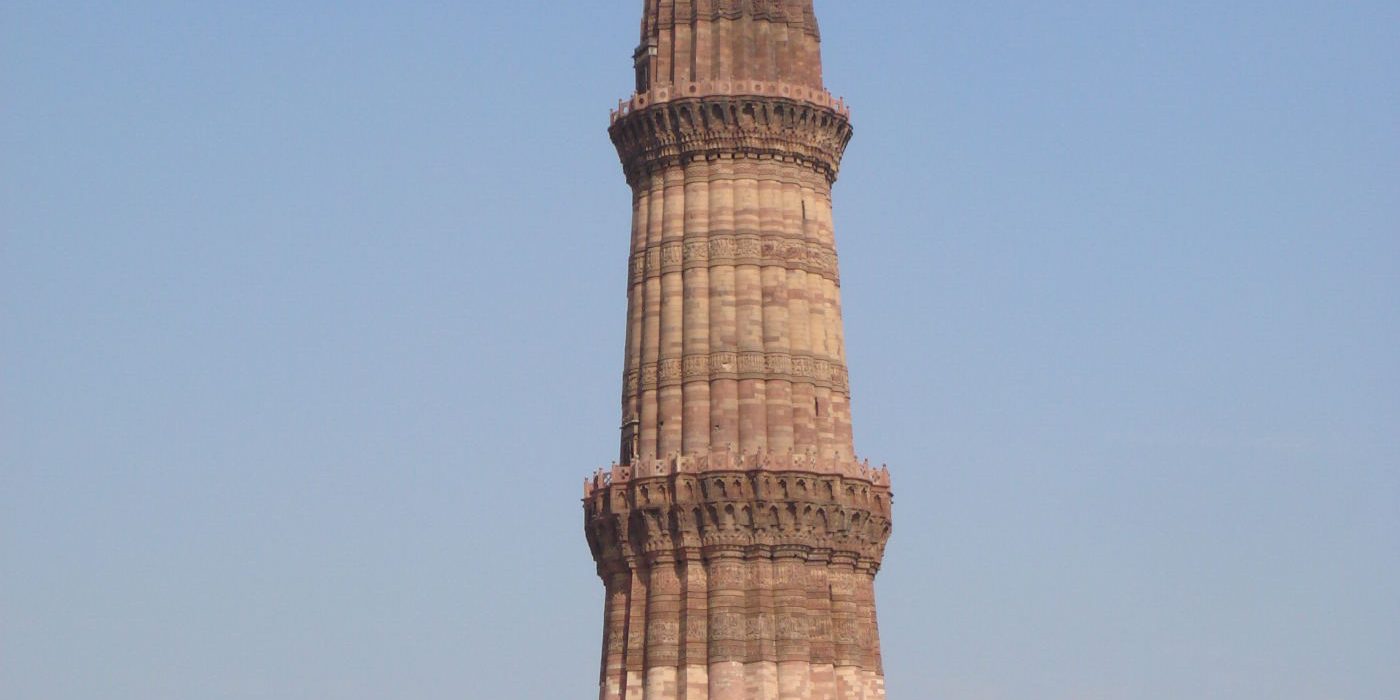 Qutub Minar in red and buff sandstone is the highest tower in India.Built in the 13th century, the magnificent tower stands in the capital, Delhi. It has a diameter of 14.32m at the base and about 2.75m on the top with a height of 72.5m. It is an architectural marvel of ancient India.

The complex has a number of other important monuments such as the gateway built in 1310, the Alai Darwaza, Quwwat-ul-Islam Mosque; the tombs of Altamish, Ala-ud-din Khalji and Imam Zamin; the Alai Minar, a 7m high Iron Pillar, etc.

Qutub-ud-Din Aibak of Slave Dynasty laid the foundation of Minar in A.D. 1199 for the use of mu’azzin (crier) to give calls for prayer and raised the first storey, to which were added three more storeys by his successor and son-in-law, Shams-ud-Din Itutmish (A.D. 1211-36). All the storeys are surrounded by a projected balcony encircling the minar and supported by stone brackets, which are decorated with honey-comb design, more conspicuously in the first storey.

Quwwat-ul-Islam Mosque, to the north-east of minar was built by Qutub-ud-Din Aibak in A.D. 1198. It is the earliest extant – mosque built by the Delhi Sultans. It consists of a rectangular courtyard enclosed by cloisters, erected with the carved columns and architectural members of 27 Hindu and Jaina temples, which were demolished by Qutub-ud-Din Aibak as recorded in his inscription on the main eastern entrance. Later, a lofty arched screen was erected and the mosque was enlarged, by Shams-ud- Din Itutmish (A.D. 1210-35) and Ala-ud-Din Khalji. The Iron Pillar in the courtyard bears an inscription in Sanskrit in Brahmi script of fourth century A.D., according to which the pillar was set up as a Vishnudhvaja (standard of god Vishnu) on the hill known as Vishnupada in memory of a mighty king named Chandra. A deep socket on the top of the ornate capital indicates that probably an image of Garuda was fixed into it.

The tomb of Itutmish (A.D. 1211-36) was built in A.D. 1235. It is a plain square chamber of red sandstone, profusely carved with inscriptions, geometrical and arabesque patterns in Saracenic tradition on the entrances and the whole of interior. Some of the motifs viz., the wheel, tassel, etc., are reminiscent of Hindu designs.

Alai- Darwaza, the southern gateway of the Quwwat-ul-Islam mosque was constructed by Ala-ud-Din Khalji in A.H. 710 (A.D. 1311) as recorded in the inscriptions engraved on it. This is the first building employing Islamic principles of construction and ornamentation.

Alai Minar, which stands to the north of Qutub-Minar, was commenced by Ala-ud-Din Khalji, with the intention of making it twice the size of earlier Minar. He could complete only the first storey, which now has an extant height of 25 m. The other remains in the Qutub complex comprise madrasa, graves, tombs, mosque and architectural members.

UNESCO has declared the highest stone tower in India as a world heritage.