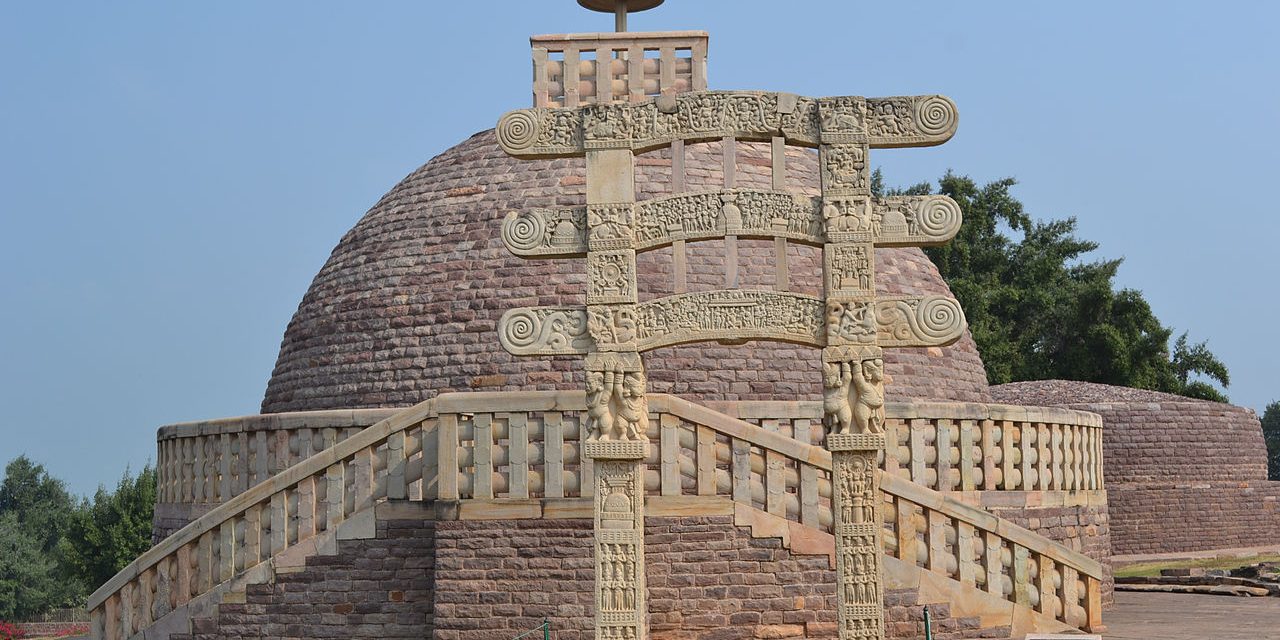 Buddhist Monuments are one of the oldest monuments belonging to the community. Sanchi, also known as Kakanaya, Kakanava, Kakanadabota and Bota-Sriparvata in ancient times is situated in the state of Madhya Pradesh. It is a religious place with historical and archaeological significance. Sanchi is famous in the world for stupas, monolithic Asokan pillar, temples, monasteries and sculptural wealth dating from 3rd century B.C. to 12th century A.D.The Sanchi stupas are noteworthy for their gateways as they contain ornamented depiction of incidents from the life of Buddha and his previous incarnations, “Bodhisattvas”, as described in the Jataka tales. Here, Gautam Buddha is depicted by symbols, such as the wheel, which represents his teaching.

Sanchi was virtually forgotten after the 13th Century until 1818, when General Taylor, a British Officer rediscovered it, half buried and well preserved. Later in 1912, Sir John Marshal, Director General of Archaeology, ordered the restoration work at the site.

During Sunga times, several edifices were raised at Sanchi and its surrounding hills. The Asokan stupa was enlarged and faced with stones and decorated with balustrades, staircase and a harmika on the top. The reconstruction of Temple 40 and erection of Stupas 2 and 3 also date back to the same time. In the first century B.C., the Andhra-Satavahanas, who had extended their sway over the eastern Malwa, caused the elaborately carved gateways to Stupa 1. From the second to 4th century A.D., Sanchi and Vidisha came under the Kushanas and Kshatrapas and subsequently passed on to the hands of the Guptas. During the Gupta period, some temples were built and sculptures were added.

The largest stupa, known as the Great Stupa, is surrounded by a railing with four carved gateways facing all the four directions of the compass. The gateways were probably carved around 100 A.D. Stupas are large hemispherical domes, containing a central chamber, in which the relics of the Buddha were placed. The stupas at Sanchi trace the development of the Buddhist architecture and sculpture at the same location beginning from 3rd century B.C. to 12th century A.D. One of the most interesting features of all the sculptures here, is the lack of images of the Buddha in human form. The carvings have a wonderful vitality and show a world where people and animals live together in happiness, harmony and plenty. stylised depiction of nature is exquisite. Lord Buddha has been shown symbolically in inanimate figures. Presently under a UNESCO project, Sanchi and another Buddhist site, Satdhara, is being further excavated, conserved and environmentally developed.