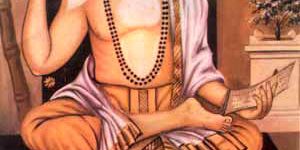 Shri Madhwacharya (1238–1317) was the chief proponent of Tattvavada (Philosophy of Reality), popularly known as Dvaita or Dualistic school of Hindu philosophy. It is one of the three most influential Vedanta philosophies. Madhva was one of the important philosophers during the Bhakti movement. He was a pioneer in many ways, going against standard conventions and norms. According to tradition, Madhwacarya is believed to be the third incarnation of Vayu , after Hanuman and Bhima.

Birth and childhood of Sri Madhwacharya

Madhvacharya was born on Vijaya-dasami day of 1238 CE at Pajaka, a tiny hamlet near Uuupi. His parents Narayana Bhatta and Vedavati. They named him Vasudeva at birth. Later he became famous by the names Purnaprajna, Anandatirtha and Madhvacarya. Before the birth of madhvacharya ,when his parents had gone for a purchase in the market, a beggar climbed a dhvaja stambha and announced:-“Bhagavan vaayu deva is going to take birth in Paajaka kshetra to a couple”.The prediction made by the beggar was discussed by the parents of acharya till they reached home. Even as a child, Vasudeva exhibited precocious talent for grasping all things spiritual. He was drawn to the path of renunciation and even as a young boy of eleven years, he chose initiation into the monastic order from Acyuta-Prajna , a reputed ascetic of the time, near Udupi, in the year Saumya (1249 CE). The preceptor Acyuta Preksa gave the boy Vasudeva the name of ‘Purnaprajna’ at the time of his initiation into sannyasa.

A little over a month later, little Purnaprajna is said to have defeated a group of expert scholars of tarka (logic) headed by Vasudeva-pandita. Overjoyed at his precocious talent, Acyuta Preksa consecrated him as the head of the empire of Vedanta and conferred upon him the title of Ananda Tirtha.

Thus Purna-prajna is the Acarya’s name given to him at the time of sannyasa (renunciation). The name conferred on him at the time of consecration as the Master of Vedanta is ‘Ananda Tirtha’. Madhva, a name traceable to the vedas (Balittha Suktham), was the nom-de-plume assumed by the Acarya to author all his works. Madhvacharya showed that Vedas talk about him as “Madhva” and utilized that name for himself. However, he used Ananda Tirtha or Sukha Tirtha also to author his works. Madhvacharya was the name by which he was to later be revered as the founders of Tattva-vada or Dvaita-mata.

Madhwacharya presented a very simple vision of the world. It was clear to him that there were differences and distinctions in the world. Matter was distinct from mind. One material thing was distinct from another, one person from another. Above all, there was a radical difference between God and the world. This in a nutshell is his doctrine of Panchabeda or five differences, which stated that there was an absolute distinction between God and the soul, God and matter, souls and matter, each individual soul and another, and each material thing and another. There is an unbridgeable gulf between God and all other beings because God is the only independent Reality.