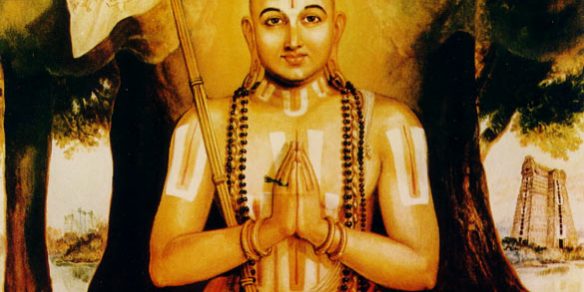 Ramanujacharya was a theologian, philosopher, and scriptural exegete. He is seen by Srivaisnavas as the third and most important teacher (acarya) of their tradition (after Nathamuni and Yamunacharya), and by Hindus in general as the leading expounder of Visistadvaita, one of the classical interpretations of the dominant Vedanta school of Hindu philosophy.

Ramanuja was born Ilaya Perumal in a Brahmin family in the village of Perumbudur, Tamil Nadu, India in 1017 CE. His father was Asuri Keshava Somayaji Deekshitar and mother was Kanthimathi. “From a young age he is reputed to have displayed a prodigious intellect and liberal attitudes towards caste. At this time he became friendly with a local, saintly Sudra (member of the servile caste) by the name of Kancipurna, whose occupation was to perform services for the local temple idol of the Hindu deity Vishnu. Ramanuja admired Kancipurna’s piety and devotion to Vishnu and sought Kancipurna as his guru-much to the horror of Kancipurna who regarded Ramanuja’s humility before him as an affront to caste propriety.”

Shortly after being married in his teenage years, and after his father died, Ramanuja and his family moved to the neighboring city of Kancipuram. There Ramanuja found his first formal teacher, Yadavaprakasha, who was an accomplished professor of the form of the Vedanta philosophy that was in vogue at the time-a form of Vedanta that has strong affinities to Shankara’s Absolute Idealistic Monism (Advaita Vedanta) but was also close to the Difference-and-non-difference view (Bhedabheda Vedanta). (“Vedanta” means the ‘end of the Vedas’ and refers to the philosophy expressed in the end portion of the Vedas, also known as the Upanishads, and encoded in the cryptic summary by Badharayana called the Vedanta Sutra or Brahma Sutra. The perennial questions of Vedanta are: what is the nature of Brahman, or the Ultimate, and what is the relationship between the multiplicity of individuals to this Ultimate. Vedanta comprises one of the six orthodox schools of Hindu philosophy.) ”

From a young age, his intelligence and ability to comprehend highly abstract philosophical points were legendary. He took initiation from Yadavaprakasa, a renowned Advaitic scholar. Though his new guru was highly impressed with his analytical ability, he was quite concerned by how much emphasis Ramanuja placed on bhakti. After frequent clashes over interpretation, Yadavaprakasa decided the young Ramanuja was becoming too much of a threat and plotted a way to kill him. However, Ramanuja’s cousin Govinda Bhatta (a favourite of Yadavaprakasa) discovered the plot and helped him escape. An alternative version is that one of Yadavaprakasa’s students plotted to kill Ramanuja as a means of pleasing their teacher, but Sri Ramanuja escaped in the afore-mentioned manner. Yadavaprakasa was horrified when learnt about the conspiracy. Ramanuja returned to Yadavaprakasa’s tutelage but after another disagreement, Yadavaprakasa asked him to leave. Ramanuja’s childhood mentor, Kancipurna, suggested he meet with Kancipurna’s own guru, Yamunacharya. After renouncing the life of a house-holder, Ramanuja travelled to Srirangam to meet an aging Yamunacharya, a philosopher of the remergent Vishishtadvaita school of thought. Yamunacharya had died prior to Ramanuja’s arrival. Followers of Ramanuja relate the legend that three fingers of Yamunacharya’s corpse were curled. Ramanuja saw this and understood that Yamunacharya was concerned about three tasks. Ramanuja vowed to complete these–

Legend goes that on hearing the vow, the three fingers on the corpse straightened. Ramanuja accepted Yamunacharya as his Manasika Acharya and spent 6 months being introduced to Yamunacharya’s philosophy by his disciple, Mahapurna although he did not formally join the community for another year. Ramanuja’s wife followed very strict brahminical rules of the time and disparaged Mahapurna’s wife as being of lower subcaste. Mahapurna and his wife left Srirangam. Ramanuja realized that his life as a householder was interfering with his philosophical pursuit as he and his wife had differing views. He sent her to her parent’s house and renounced family and became a sanyasin. Ramanuja started travelling the land, having philosophical debates with the custodians of various Vishnu temples. Many of them, after losing the debates, became his disciples. Ramanuja standardized the liturgy at these temples and increased the standing and the membership of the srivaishnava school of thought. He wrote his books during this time. Ramanuja, who was a Vaishnavite, might have faced threats from some Shaivite Chola rulers who were religiously intolerant . Ramanuja and a few of his followers moved to the Hoysala kingdom of Jain king Bittideva and queen Shantala Devi in Karnataka. Bittideva converted to Srivaishanavism, in some legends after Ramanuja cured his daughter of evil spirits, and took the name Vishnuvardhana meaning “one who grows the sect of Vishnu”. However, the queen and many of the ministers remained Jain and the kingdom was known for its tolerance. Ramanuja re-established the liturgy in the Cheluvanarayana temple in Melukote In Mandya District and Vishnuvardhana re-built it and also built other Vishnu temples like Chennakesava Temple and Hoysaleswara Temple.

The key concept of visishtadvaita is the sarira- sariri bhaava, the body-soul relationship between the universe and Brahman. There are three reals, thathvathraya, namely, Isvara, the Lord, Jiva the individual soul, and Jagath, the world of insentient beings. They are not separate entities but together they form one organic whole. This is explained by the concept of body and soul relationship.

Ramanuja defines sarira as ‘that substance that a spiritual entity can use and support entirely for his own purpose, and that, in its essence is exclusively subordinate to that entity.’ Being the sarira of the Lord, the universe of sentient and insentient beings stands in an inseparable relation with Him. This relationship, called aprthaksidhdha, is like that of a substance and its attribute, where the latter cannot exist without the former as in the example of fire and heat.

Brahman is the material as well as the efficient cause of the universe. Ramnuja cites the sruti text ‘yatho va imana bhoothaani jaayanthe yena jaathaani jeevanthi yasmin abhi samvisanthi thadvijijnaasava thadbrahma’ (Taitreya up.), ‘that from which everything came from, by which everything that is born is sustained and into which everything merges back, know that to be Brahman.’

The causality of Brahman is also ascertained by the text ‘sadheva soumya idhamagra aaseeth ekameva advitheeyam; thadhaikshatha bahusyaamprajaayeya, which says that there was sat alone in the beginning , one only without a second and it willed to become many. This according to Ramanuja confirms the body-soul relationship between Brahman and the universe. He claims that this is the real purport of the mahavakya thathvamasi and not the absolute identity as professed by advaita. Everything existed in Narayana in subtle form before creation and became manifest in gross form after creation.

An objection that may arise with respect to the authority of this concept of sarira-sariri bhava is met with by means of the ghataka sruti texts like the one which says ‘He who dwells in this earth and within the earth, whom the earth does not know, whose body the earth is, who rules the earth from within, He is thy self, the ruler within and immortal.’ There are several texts citing Brahman as the Self of everything naming the elements and the individual soul separately as the sarira of Brahman.

Brahman of visishtadvaita is not nirguna, without attributes but possesses innumerable auspicious qualities, ananthakalyanagunavisishta, which are not adventitious but form His svarupa. The scriptural definition of Brahman as Sathyam, Jnanam, Anantham is explained by Ramanuja in accordance with the principle of Samanadhikaranya, coordinate predication, according to which several terms are applicable to an entity on different grounds. For instance, in the expression shyamo yuva Devadattah, Devadatta is a dark young man, the adjectives shyama and yuva denote the same entity, Devadatta. Similaraly the epithets Sathyam, jnanam, anantham denote the same Brahman, sathyam implying absolutely unconditional existence, jnanam, non-contracted knowledge and anantham implies that Brahman is not limited by space,time and form.

Jiva in visishtadvaita is real and so is Jagath. The jnana of jiva is contracted due to karma, born of ajnana. W hen the ajnana is removed by jnana as a result of bhakthi, jiva regains its original state of liberation when its jnana becomes infinite.

Bhakthi is the sole means of liberation in visishtadvaita. Bhakthi and Prapaththi are the two wings with which the jiva ascends to the realm of the Lord to become one with Him. Karmayoga and jnanayoga are the natural outcome of bhakthi and prappaththi, total surrender, as the devotee acquires the knowledge that the Lord is the inner self of whom he himself is the sarira. The devotee realizes his own state as sesha, dependent on, adheya, being supporteby, and niyaamya, being led by the Lord, who is the Seshi, Master, Adhaara, Support and niyantha, the one who leads him. As a result the jiva leads his life as an instrument of the Lord, acquiring viveka and vairagya, offering all his thought, word, and deed to the feet of the Lord. He sees the Lord in everything and everything in Him. This is the unity in diversity achieved through devotion.