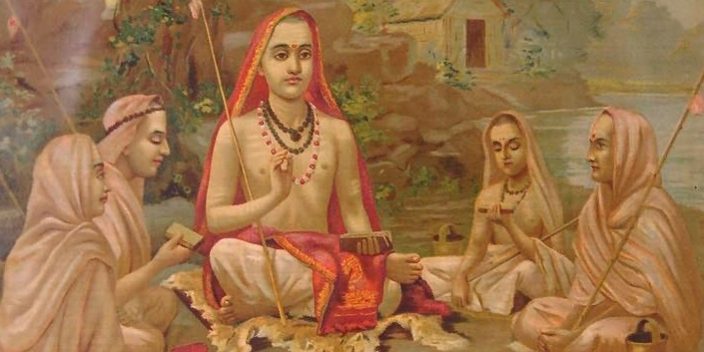 Adi Shankaracharya was the first philosopher who consolidated Advaita Vedanta, one of the sub-schools of Vedanta. He believed in the greatness of the holy Vedas and was a major proponent of the same. Not only did he infuse a new life into the Vedas, but also advocated against the Vedic religious practices of ritualistic excesses. He founded four Shankaracharya Peethas in the four corners of India, which continue to promote his philosophy and teachings. Adi Sankaracharya biography reveals that he was also the founder of Dashanami monastic order and the Shanmata tradition of worship.

Adi Sankaracharya occupies a very important position in the history of Indian philosophy. It can be affirmed, without any fear of contradiction, that Bharata Varsha would have ceased to be Bharata Varsha several centuries ago and would never have survived the murderous sword, the devastating fire and the religious intolerance of the successive invaders, if Sankara had not lived the life he lived and taught the lessons he taught. And those lessons are still pulsating in every cell and in every protoplasm of the true aspirant and the true Hindu.

According to Paramahamsa Niranjanananda Saraswati who is the author of one of the source texts called Sannyasa Darshan, Shankara was born around the year 686AD, in the village of Kaladi in the Karali state. Approaching middle age and still childless, his parents Shivaguru and Vishishta Devi spent some time on the Vrishna mountain near their village. They worshipped Lord Chandra Maulishwar Shiva in the temple, living off fruits, berries and roots and it was during this period of austerities that Lord Shiva came to Shivaguru in a dream. Acknowledging his sincere devotion, Lord Shiva asked Shivaguru of his greatest wish, to which he replied, “Bless me with a long living omniscient son”. Lord Shiva told him an omniscient son would be short lived and a long living son would not be omniscient, so Shivaguru prayed that his son would be omniscient. Lord Shiva replied “Your wish will be fulfilled, I myself will come to your family as your son”

Shankara was a prodigious child and was hailed as ‘Eka-Sruti-Dara’, one who can retain anything that has been read just once. Shankara mastered all the Vedas and the six Vedangas from the local gurukul and recited extensively from the epics and Puranas. Shankara also studied the philosophies of diverse sects and was a storehouse of philosophical knowledge.

From a young age, Shankara was inclined towards sannyasa, but it was only after much persuasion that his mother finally gave her consent. Shankara then left Kerala and travelled towards North India in search of a guru. On the banks of the Narmada River, he met Govinda Bhagavatpada, the disciple of Gaudapada. When Govinda Bhagavatpada asked Shankara’s identity, he replied with an extempore verse that brought out the Advaita Vedanta philosophy. Govinda Bhagavatapada was impressed and took Shankara as his disciple. The guru instructed Shankara to write a commentary on the Brahma Sutras and propagate the Advaita philosophy. Shankara travelled to Kashi, where a young man named Sanandana, hailing from Chola territory in South India, became his first disciple. According to legend, while on his way to the Vishwanath Temple, Sankara came upon an untouchable accompanied by four dogs. When asked to move aside by Shankara’s disciples, the untouchable replied: “Do you wish that I move my ever lasting Atman (“the Self”), or this body made of flesh?” Realizing that the untouchable was none other than god Shiva himself, and his dogs the four Vedas, Shankara prostrated himself before him, composing five shlokas known as Manisha Panchakam. At Badari he wrote his famous Bhashyas (“commentaries”) and Prakarana granthas (“philosophical treatises”).

Adi Shankaracharya spread the tenets of Advaita (“non-dualism”) Vedanta, the supreme philosophy of monism to the four corners of India with his ‘digvijaya’ (the conquest of the quarters). The quintessence of Advaita Vedanta is to reiterate the truth of reality of one’s essential divine identity and to reject one’s thought of being a finite human being with a name and form subject to earthly changes.