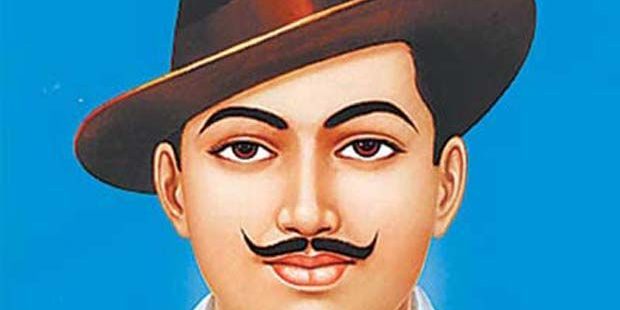 Bhagat Singh was an Indian freedom fighter, considered to be one of the most influential revolutionaries of the Indian independence movement. He is often referred to as Shaheed Bhagat Singh (the word shaheed meaning “martyr”).

Gave a new direction to revolutionary movement in India, formed ‘Naujavan Bharat Sabha’ to spread the message of revolution in Punjab, formed ‘Hindustan Samajvadi Prajatantra Sangha’ along with Chandrasekhar Azad to establish a republic in India, assassinated police official Saunders to avenge the death of Lala Lajpat Rai, dropped bomb in Central Legislative Assembly along with Batukeshwar Dutt. His legacy prompted youth in India to begin fighting for Indian independence and contributed to the rise of socialism in India.

Bhagat Singh was born on 27th September, 1907 into a Sandhu family in Khatkar Kalan village in Lyallpur district of Punjab. The Jalianwalabagh Massacre, which took place in Punjab in 1919, had a deep impact on the mind of young Bhagat Singh. In the year 1920, Mahatma Gandhi started the Non Cooperation Movement. Bhagat Singh at that time was of 13 years and he became an active participant with a great hope that this movement would bring freedom to the country. But he was really disappointed with Gandhiji`s decision to call off this movement following the `Chauri Chaura` riot in the year 1922. Further, Bhagat Singh challenged the British rule and followed the wishes of Mahatma Gandhi by burning his government-school books and imported clothes.

Bhagat in his early age read a lot of literature and poetries especially written by Punjabi writers. Allama Iqbal from Sialkot, who was also a freedom fighter, was Bhagat Singh`s favourite poet. By winning an essay competition that was organised by Punjab Hindi Sahitya Sammelan in 1923, young Bhagat Singh attracted the attention of the Punjab Hindi Sahitya Sammelan. Initially, Bhagat Singh studied at the National College in Lahore. But after some time, he ran away from his home in order to escape early marriage and became a member of the organisation Naujawan Bharat Sabha (“Youth Society of India”). In the Naujawan Bharat Sabha, Singh and his fellow revolutionaries grew popular amongst the youth. He also joined the Hindustan Republican Association through introduction by history teacher, Professor Vidyalankar, which had prominent leaders like Ram Prasad Bismil, Chandrashekhar Azad and Ashfaqulla Khan. It is believed that he went to Kanpur to attempt free Kakori train robbery prisoners from the jail, but returned to Lahore for unknown reasons. On the day of Dasara in October 1926, a bomb was blasted in Lahore, and Bhagat Singh was arrested for his alleged involvement in this Dasara Bomb Case in 29 May 1927, and was released on a bail of Rs.60,000 after about five weeks of his arrest. He wrote for and edited Urdu and Punjabi newspapers published from Amritsar. In September 1928, a meeting of various revolutionaries from across India was called at Delhi under the banner of the Kirti Kissan Party. Bhagat Singh was the secretary of the meet. His later revolutionary activities were carried out as a leader of this association.