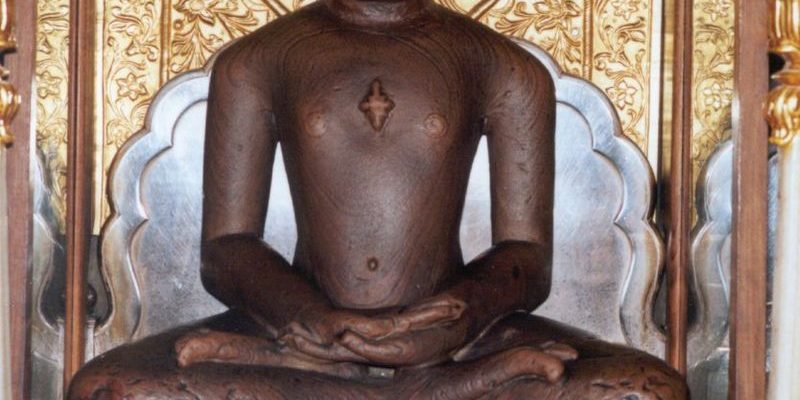 The 24th and last Tirthankara of the Jains, Lord Mahavir Jain is much revered among the Jains. His teachings and philosophies continue to inspire numerous people even today. He was born in a royal family and denounced his royal family life to attain spiritual knowledge like the Buddha. He was named Vardhamana Mahavir Jain because when he was born his father, king Siddhartha prospered like anything. Vardhamana means increasing and the king credited his growing success and prosperity to the birth of his son.

As King Siddartha’s son,Vardhamana had a lavish childhood and lived like a proper prince. He did many great things in his childhood like saving his friend from a poisonous snake, fighting a monster, etc. that proved that he was no ordinary child. This earned him the name “Mahavira”. He was born with all worldly pleasures and luxuries but somehow he was never attracted by them. When he was in his late 20’s his parents died. That is when he decided to become a monk. He left all his worldly possessions including clothing and went into seclusion to become a monk.

After 12 years of strict meditation and ascetic lifestyle, he finally gained enlightenment and spiritual knowledge and came to be known as Lord Mahavir Jain. He gave up food and learnt to control his desires and wants. After gaining enlightenment, he preached what he had learnt to all those who needed it. He traveled far and wide barefoot spreading his divine knowledge and words of wisdom for thirty years. Numerous people were inspired by him and converted to Jainism. He left his mortal form around 527 B.C at the age of 72. The Jains celebrate this day as Diwali the day when Lord Mahavir Jain attained liberation is the last day on the Hindu calendar that is celebrated as Diwali.

He spent the next thirty years travelling on bare feet around India preaching to the people the eternal truth he realized. He attracted people from all walks of life, rich and poor, kings and commoners, men and women, princes and priests, touchables and untouchables. He organized his followers, into a four fold order, namelymonk (Sadhu), nun (Sadhvi), layman (Shravak), and laywoman (Shravika). Later on they are known as Jains. The ultimate objective of his teaching is how one can attain the total freedom from the cycle of birth, life, pain, misery, and death, and achieve the permanent blissful state of one’s self. This is also known as liberation, nirvana, absolute freedom, or Moksha. He explained that from eternity, every living being (soul) is in bondage of karmic atoms, that are accumulated by its own good or bad deeds. Under the influence of karma, the soul is habituated to seek pleasures in materialistic belongings and possessions. Which are the deep rooted causes of self-centered violent thoughts, deeds, anger, hatred, greed, and such other vices. These result in accumulating more karma. He preached that right faith (samyak-darshana), right knowledge (samyak-jnana), and right conduct (samyak-charitra) together will help attain the liberation of one’s self.

At the heart of right conduct for Jains lie the five great vows:

Lord Mahavir Jain also preached the gospel of universal love, emphasizing that all living beings, irrespective of their size, shape, and form how spiritually developed or under-developed, are equal and we should love and respect them.

Jainism existed before Mahavir, and his teachings were based on those of his predecessors. Thus, unlike Buddha, Mahavir was more of a reformer and propagator of an existing religious order than the founder of a new faith. He followed the well established creed of his predecessor Tirthankara Parshvanath. However, Mahavir did reorganize the philosophical tenets of Jainism to correspond to his times. Lord Mahavir preached five great vows while Lord Parshva preached four great vows.

In the matters of spiritual advancement, as envisioned by Mahavir, both men and women are on an equal footing. The lure of renunciation and liberation attracted women as well. Many women followed Mahavir’s path and renounced the world in search of ultimate happiness.

In a few centuries after Mahavir’s nirvana, Jain religious order (Sangha) grew more and more complex. There were schisms on some minor points although they did not affect the original doctrines as preached by the Tirthankars. Later generations saw the introduction of ritualistic complexities which almost placed Mahavir Jain and other Tirthankars on the throne of Hindu deities.