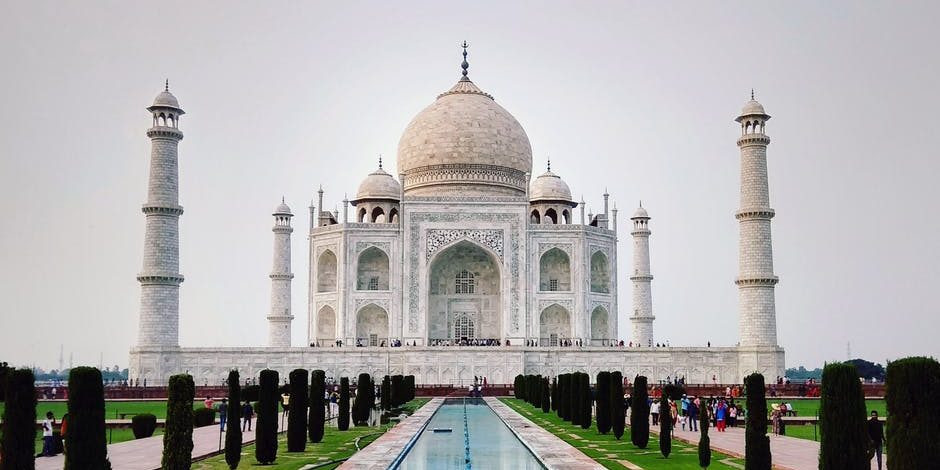 Sheer poetry in marble. Majesty and magnificence, unrivalled, the Taj Mahal is the only one of its kind across the world. The monumental labour of love of a great ruler for his beloved queen. The ultimate realisation of Emperor Shahjahan’s dream. One of the wonders of the world. From 1631 A.D., it took 22 years in its making. An estimated 20,000 people worked to complete the enchanting mausoleum, on the banks of the Yamuna. For a breathtaking beautiful view of the Taj Mahal, one has to see it by moonlight.History

The construction of this marble masterpiece is credited to the Mughal emperor Shah Jahan who erected this mausoleum in memory of his beloved wife, Arjumand Bano Begum, popularly known as Mumtaz Mahal, who died in A.H. 1040 (A.D. 1630). Her last wish to her husband was “to build a tomb in her memory such as the world had never seen before”. Thus emperor Shah Jahan set about building this fairytale like marvel. The construction of Taj Mahal was started in A.D. 1632 and completed at the end of 1648 A.D. For seventeen years, twenty thousand workmen are said to be employed on it daily, for their accommodation a small town, named after the deceased empress-‘Mumtazabad, now known as Taj Ganj, was built adjacent to it.

Amanat Khan Shirazi was the calligrapher of Taj Mahal, his name occurs at the end of an inscription on one of the gates of the Taj. Poet Ghyasuddin had designed the verses on the tombstone, while Ismail Khan Afridi of Turkey was the dome maker. Muhammad Hanif was the superintendent of Masons. The designer of Taj Mahal was Ustad Ahmad Lahauri. The material was brought in from all over India and central Asia and it took a fleet of 1000 elephants to transport it to the site. The central dome is 187 feet high at the centre. Red sandstone was brought from Fatehpur Sikri, Jasper from Punjab, Jade and Crystal from China, Turquoise from Tibet, Lapis Lazuli and Sapphire from Sri Lanka, Coal and Cornelian from Arabia and diamonds from Panna. In all 28 kind of rare, semi precious and precious stones were used for inlay work in the Taj Mahal. The chief building material, the white marble was brought from the quarries of Makrana, in district Nagaur, Rajasthan.

The main gate of Taj faces the Southern gate. The gateway is 151 feet by 117 feet and rises to a height of 100 feet. Tourists can enter the main compound by a small gate at the side of the main gate.

This main gate of red sandstone measures 30 mt. in height. It is inscribed with verses from the Koran in Arabic. The small domed pavilions on top are in Hindu style and signify regality. A striking feature of the gateway is that the lettering appears to be of the same size. The engravers have skillfully enlarged and lengthened the letters which create an illusion of uniformity.

Well laid out gardens measuring 300 x 300 mt. in the form of a Charbagh are spread on either side of the pavement. In the centre is a platform from where tourists can capture the Taj on film.

To the left of the above mentioned platform is the Taj Museum. Original drawings available here show the precision with which the architect had planned this monument. He even anticipated that it would be completed in 22 years. Drawings of the interiors show the position of the graves in such precision that the foot of the graves faces the viewer from any angle.

The Mosque and the Jawab

To the left of the Taj is a mosque made of red sandstone. It is common in Islam to build a mosque next to a tomb, as it sanctifies the area and provides for a place for worship. This mosque is still used for Friday prayers.

An identical mosque is also built to the right of the Taj and is known as the Jawab (answer). Prayers are not held here as it faces west i.e. away from Mecca, the holy city of the Muslims. It was built to maintain symmetry.

The Taj itself stands in a raised platform. The four minarets at each corner of the plinth provide a perfect balance to the tomb. The minarets measure 41.6 m high and each has a deliberate slant outwards so that in an unlikely event of an earthquake, they would not fall on the tomb but away from it. The bulbous dome of the Taj Mahal rests on an extraordinarily high drum and rises to a total height of 44.41 mt. From the base of the drum to the apex to the finial. The central dome, irrespective of the angles of the view. There is only one point of access to the plinth and tomb, a double staircase facing the entrance. One has to remove shoes over or can put on the shoe covers which are provided at a nominal cost by the staff stationed here for this purpose.

Interior of the Taj

The interior of the mausoleum comprises a lofty central chamber, a crypt immediately below this and four octagonal corner rooms originally intended to house the graves of other royal family members.

The cenotaph of Shah Jahan is inscribed in Persian – “Marqad Mutahar Aali Hazrat Firdaus Ashiyani Sahib-qiran Saani Saani Shah Jahan Badshah taab surah sanh 1076 Hijri” (The sacred sepulchre of his most exalted Majesty, dweller of Paradise, the second lord of constellations, the king Shah Jahan, may his mausoleum ever flourish, 1076 A.H. (1666 A.D.). Above the tombs is a Cairene lamp, the flame of which is supposed to never burn out. Marble screen of trelliswork surrounds the graves. Both tombs are exquisitely inlaid with semi precious stones. The acoustics of the building are superb with the domed ceiling being designed to echo chants from Koran and musician’s melodies. It is suggested that one walk around the outside of the tomb, before retrieving your shoes, to appreciate it from all sides.