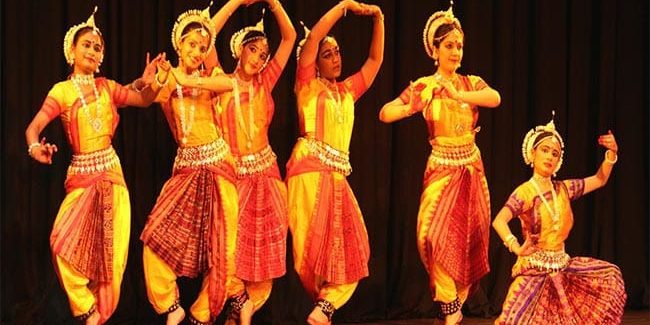 Odissi is one of the eight classical dance forms of India. It originates from the state of Odisha, in eastern India. It is the oldest surviving dance form of India on the basis of archaeological evidences. The classic treatise of Indian dance, Natya Shastra, refers to it as Odra-Magadhi. 1st century BCE bas-reliefs in the hills of Udaygiri (near Bhubaneshwar) testify to its antiquity. It was suppressed under the British but has been reconstructed since India gained independence.

It is particularly distinguished from other classical Indian dance forms by the importance it places upon the tribhangi (literally: three parts break), the independent movement of head, chest and pelvis, and upon the basic square stance known as chauka.

Origin and history
The first clear picture of Odissi dance found in the Manchapuri cave in Udayagiri which was carved at the time of king Kharavela. Flanked by two queens Kharavel himself was watching a dance recital where a damsel was performing dance in front of the court with the company of female instrumentalists. Thus Odissi can be traced back to its origin as secular dance. Later it got attached with the temple culture of Odisha. Starting with the rituals of Jagannath temple in Puri it was regularly performed in Shaivite, Vaishnavite and Sakta temple in Odisha. An inscription is found where it was also engraved that a Devadasi Karpursri’s attachment to Buddhist monastery, where she was performing along with her mother and grand mother. Thus it proves that Odissi first originated as a court dance. Later it performed in all religious places of Jaina as well as Buddhist monasteries. Odissi, was initially performed in the temples as a religious offering by the ‘Maharis’ who dedicated their lives in the services of God. It has the most closer resemblance with sculptures of the Indian Temples.

The history of Odissi dance has been traced to an early sculpture found in the Ranigumpha caves at Udaygiri (Odisha). dating to the 2nd century BC. Thus Odissi appears to be the oldest classical dance rooted in rituals and tradition. In fact, the Natya Shastra refers to Odra Magadhi as one of the vrittis and Odra refers to Odisha.

Mangalacharan: An invocational piece. After paying homage to Lord Jagganath a sloka (hymn) in praise of some God or Goddess is sung, the meaning of which is brought out through dance. Mangalacharan also includes the ‘bhumi pranam’, begging forgiveness of mother earth for stamping on her, and the ‘trikhandi pranam’ or threefold salutation – above the head to the Gods, in front of the face to the gurus and in front of the chest to the audience.

Battu Nrutya: A dance piece offered to the Lord of dance – Lord Shiva in his ‘Batuka Bhairava’ form. This piece brings out the essence of Odissi. The interrelationship between temple sculptural art and Odissi dance is established with an array of sculpturesque poses taken directly from the innumerable dancing sculptures adorning the temples of Odisha. These poses are stringed together with steps in different rhythms.

Pallavi: A pure dance item in which a raga is elaborated through eye movements, body postures and intricate footwork. Pallavi literally means ‘blossoming’. This is applicable not only to the dance, but also to the music, which accompanies it. Pallavi starts with slow, graceful and lyrical movements of the eyes, neck, torso and feet and slowly builds in a crescendo to climax in a fast tempo at the end. Both the dance and the music evolve in complexity as the dancer traces multiple patterns in space, interpreting the music dexterously in the multilayered dimensions of taal (rhythm) and laya (speed).

Abhinaya: An expressional dance where a story conveyed to the audience through mudra or hand gestures (the language of Indian classical dance), facial expression and body movement. Abhinaya can be performed on verses in Sanskrit or Odia. Most common are Abhinayas on Odia songs or Sanskrit Ashthapadis or Sanskrit stutis like Dasavatar Stotram (depicting the ten incarnations of Lord Vishu) or Ardhanari Stotram. Most of the abhinaya compositions are based on the Radha-Krishna theme. The Astapadis of the kavya ‘Gita Govinda’ written by the Saint Jayadev are an integral part of its repertoire . The beginning pieces are dedicated to God of Odisha, Lord Jagannatha – an incarnation of Lord Vishnu.

Moksha: The concluding item of a recital. Moksha means “spiritual liberation”. This dance represents a spiritual culmination for the dancer who soars into the realm of pure aesthetic delight. Movement and pose merge to create ever new patterns, ever new designs in space and time. The dance moves onto a crescendo that is thrilling to both, the eye and the ear. With the cosmic sound of the “Om”, the dance dissolves into nothingness — just like Moksha or the deliverance of the soul in real life.

Odissi terminology
Alap: In Indian classical music this is the slow introductory movement in raga. It is free of rhythm.

Avartan(a): One complete cycle of a taal.

Bani: Odissi term used to describe the spoken drum neumonics. During dance performances Bani are spoken by the percussionist or the guru.

Bhago: In taal, this would be the groups the taal is divided into. Also the points on which the tali, or khali would be. e.g., Adital (Odissi) is divided into 4 groups of 4 beats. It is said that Adital has 4 Bhago. These are the measures. Odissi music term.

Chondo: In tal, this would be how the divisions of the tal are divided. e.g., in Adital (Odissi), the sixteen beats are divided into 4 groups of 4. So the Chondo for Adital is 4 + 4 + 4 + 4. This describes what the Bhagos are.

Devadasis: Original temple dancers who were ‘servitresses of God’

Gita Govinda: Jayadev’s famous poem depicting the life of Radha and Krishna. Themes from this poem tremendously affect the classical arts of India.

Goti: The barrel-shaped tension pegs which adorn the Mardala. These are made from wood and can be shifted and more straps (Pitha) can overlap them to create more or less tension for tuning.

Gotipua: Young boys trained in the fine art of Odissi dance. The Gotipuas were allowed to leave the temple and dance for the public. The current form of Odissi is heavily influenced by the Gotipua tradition (and also the temple carvings from Odisha.)

Mano: The ending sequence that is repeated to designate that the ending of the piece or of a section. Typically in 3 repeats. Odissi term. People in Odisha inter change Tihai and Mano. But they mean the same.

Maharis or devadasis: The original temple dancers of Odisha, but now extinct. This is the root of Odissi dance that was later taught to young boys, Gotipuas. The style is now modernized and work is being done to preserve it.

Odissi gurus and performers
Padma Vibushan Kelucharan Mohapatra, Guru Pankaj Charan Das ,Guru Deba Prasad Das and Guru Raghunath Dutta were the four major gurus who revived Odissi in the late forties and early fifties. Sanjukta Panigrahi, the great exponent of Odissi, was a leading disciple of Guru Kelucharan Mohapatra’s and popularized Odissi by performing extensively, both in India and abroad. In the mid-sixties, two other disciples of Kelucharan Mohapatra, Kumkum Mohanty and Sonal Mansingh, were best known for their performances, both in India and abroad. Shrimati Laximipriya Mohapatra performed a piece of Odissi abhinaya in the Annapurna Theatre in Cuttack in 1948. This is widely upheld as the first ever performance of a classical Odissi dance item after its contemporary revival.

Most of the present day gurus were Gotipua dancers themselves, and have trained dancers and teachers all over India and abroad. In the early fifties, the outside world began to take note of Odissi. Priyambada Mohanty Hejmadi and Dr. Susama Tej represented Odisha in the classical dance category at the Inter University Youth Festival, New Delhi, in 1954 and 1955. It was here that Dr. Charles Fabri witnessed their performances, hailed Odissi as a great classical dance form, and helped Indrani Rehman and Sonal Mansingh study it. Sadly, Priyambadi Mohanty Hejmadi left for the US for 16 long years, where she hardly performed, barring a recital or two here and there. She returned to India only in the mid-nineteen seventies, by which time well known dancers had already occupied a permanent and prominent space on the Odissi horizon, and by which time Odissi had evolved considerably. The baton in India was wielded gloriously, and with outstanding success and public acclaim, by Sanjukta Panigrahi, Kumkum Mohanty and Sonal Mansingh, each of whom was a major and distinctive star.

1996: Rekha was seen imparting Odissi dance lessons (Shikhandika pose) to a group of young learners, while Indira Varma was shown learning Odissi steps to the accompaniment of the mardala in Mira Nair’s magnum opus film Kama Sutra: A Tale of Love.

2003: Rani Mukherjee performed a dance at the International Indian Film Academy Awards function dressed in Odissi costume and a number of celebrated Odissi expressed disapproval for insulting the integrity of the dance and the costume.

2007: An entire sequence of dance in Odissi costume was featured near the end of the Bollywood movie Bhool Bhulaiyaa and was performed by actress Vidya Balan and Malayalam actor Vineeth.

1991: A short (23 second) Odissi dance scene was featured in Michael Jackson’s music video of Black or White. The legendary pop-singer and dancer performs some Odissi, too.

1998: Madonna danced along with Odissi dancers live on stage during the 1998 MTV Award ceremony. US-based Odissi performers, Patnaik Sisters, were chosen to choreograph and perform alongside the legendary pop artist.