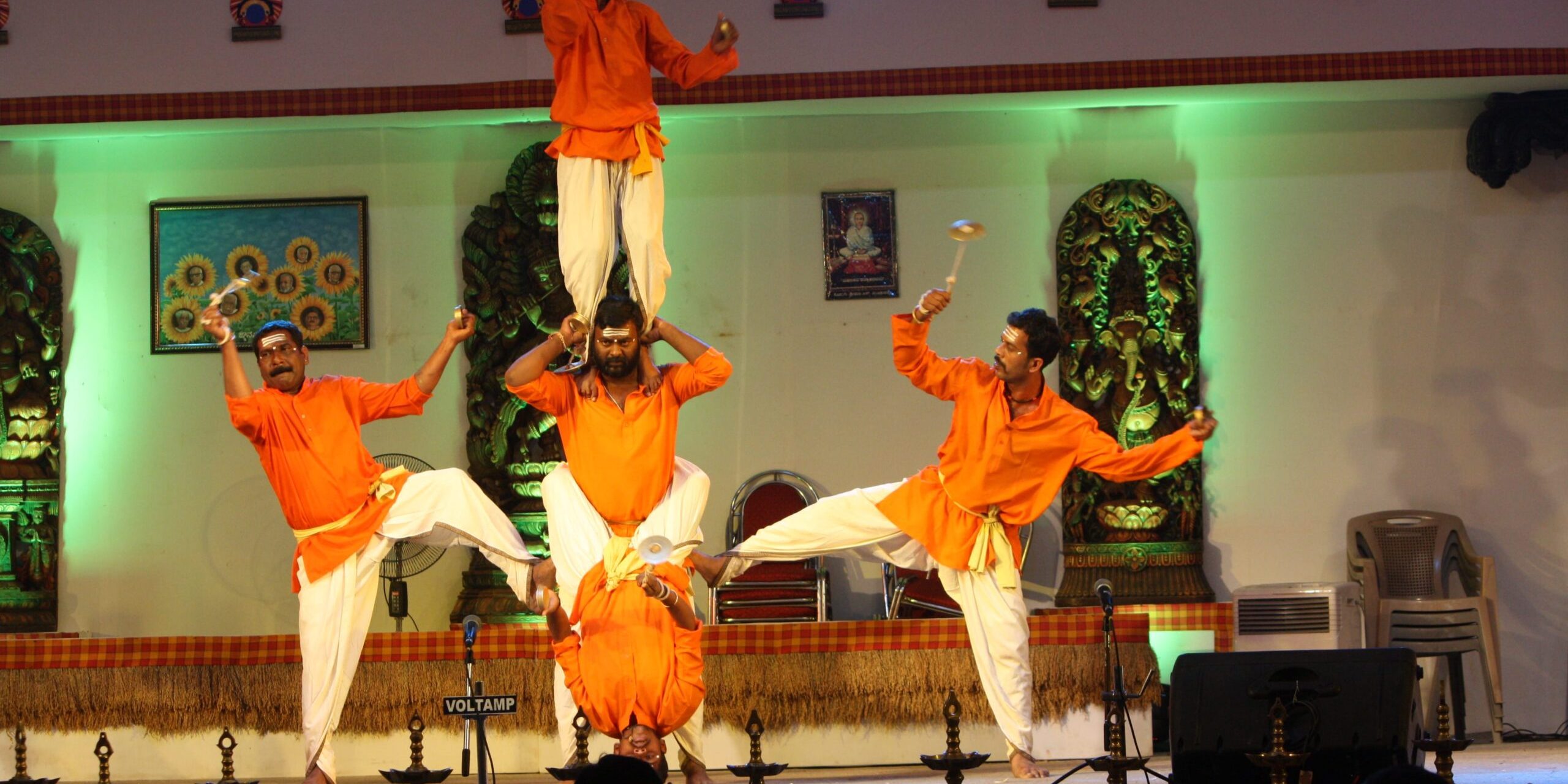 Kamsale is known as Beesu Kamsale. It is a unique folk art performed by the devotees of God Mahadeshwara. Kamsale is a brass made musical instrument. Its origin is traced to the Mythological period.

It is a group dance form performed by the menfolk in villages in the Mysore, Nanjanagudu, Kollegala and Bangalore areas. It is named after the Kamsale that is used both as an instrument and also as a prop by the dancers themselves. The kamsale comprises a cymbal in one hand and a bronze disc in the other and is used to produce a rhythmic clang.

The Kamsale nritya is closely connected to a tradition of Male Mahadeshwara, or Lord Shiva worship by the haalu kuruba community. Most of the dancers are also drawn from this community. The dance is performed to rhythmic and melodious music that is sung in praise of “Lord Male Mahadeshwara” or “Shiva”. The dance is a part of a ‘diiksha’, or oath and is taught by teacher or spiritual leader.

This art-form was showcased prominently in Kannada movies like Janumada jodi and Jogi where the protagonist is a kamsale dancer.

Instrument and Group
Kamsale is a rhythm instrument. These instruments are played in pairs. Its size is about a man’s palm. They are throated at the Centre. One which is convex in shape is held in one hand, very closely; (usually the left hand). The other one is held at length. (usually in the right hand). The artists in it group vary from three to eight. If the Kamsale is accompanied by songs, the number of artists will be from 8 to 12.

Background
‘Kamsale’ popularly known as ‘Devaraguddas’ are the disciples of Lord Mahadeshwara. Kamsale Mela is a popular folk song which deals with the history of ‘Mahadeshwara’ (worshipping deity) of Mahadeshwara hills, a renowned pilgrim centre, situated in Chamarajanagar district.

Literature
Kamsale artists are illiterates and have no printed literature. They learn those songs orally. They participate in fairs, which are held in Mahadeshwara hills during ‘Diwali’, ‘Shivaratri’ and ‘Ugadi’ festivals.

Kuruba Gowda People
It is closely connected with a tradition of Shiva worship. The artistes, drawn from Haalumatha Kuruba Gowda community. Who have vowed to live a life of devotion to Mahadeshwara are supposed to perform it. The dance is a part of a ‘diiksha’ or oath and is taught by teacher or spiritual leader. Kamsale Mahadevaiah of Mysore was a famous artist. He trained students at university level. In cultural exchange programme of India, he toured many countries and performed.

This folk art dancers are found in the Kannada speaking areas of Mysore, Kollegal, Bangalore, Chamarajanagar and Mandya region.