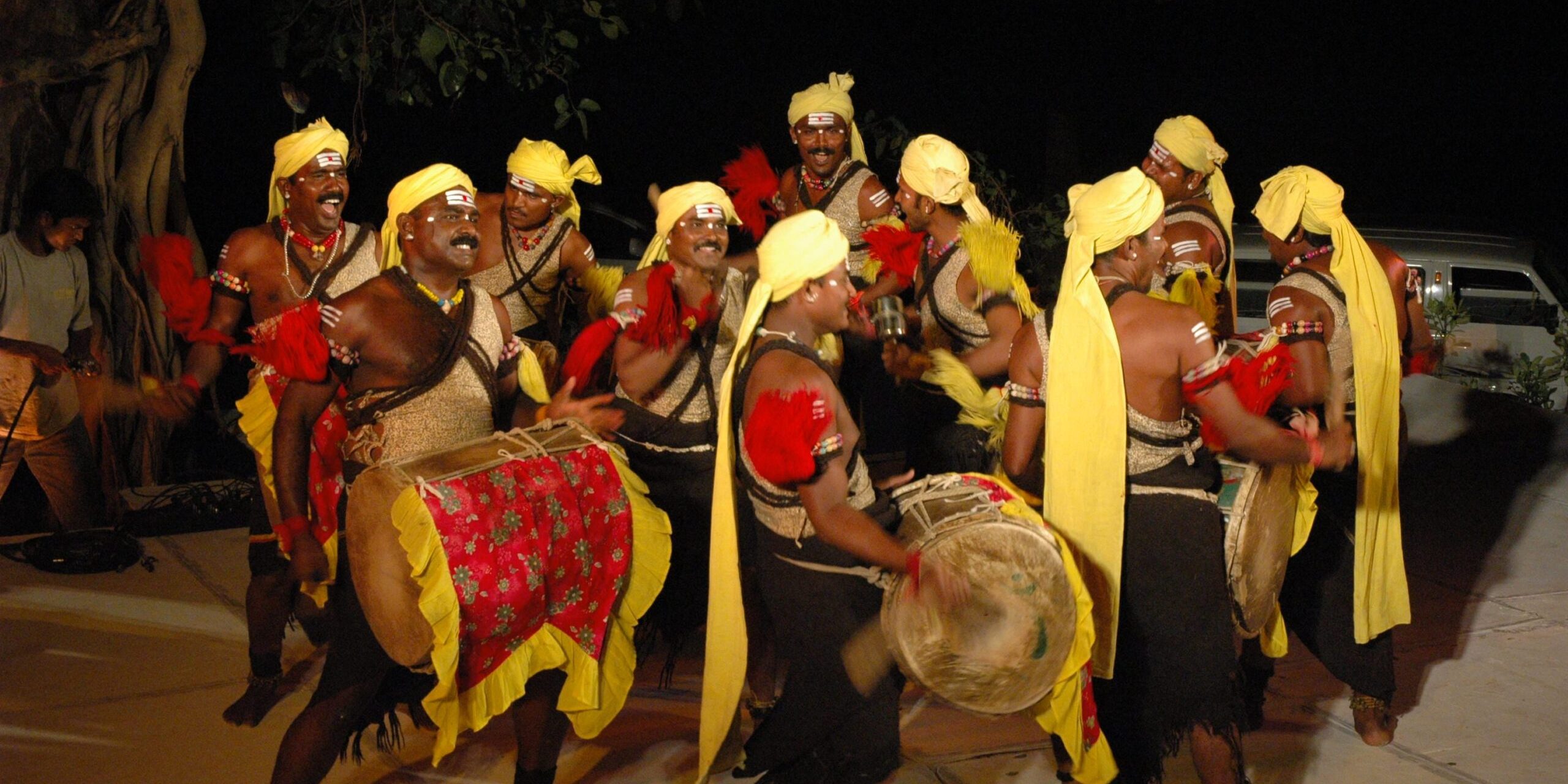 Dollu Kunitha (dance), is a major form of art, occupies the pride of place among folk dances. Dollu Kunitha is a popular drum dance of Karnataka accompanied by singing. It provides both spectacular variety and complexity of skills in the process of demonstration. Woven around the presiding deity of Beereshwara or Beeralingeswara, chiefly worshipped by the Kuruba Gowdas of Karnataka and Andhra Pradesh, also called Halumathasthas, it presents both entertainment and spiritual edification.This is a group dance that is named after the Dollu – the percussion instrument used in the dance. The group consists of 12 to 16 dancers who each wear the drum and beat it to different rhythms while also dancing. The beat is controlled and directed by a leader with cymbals, positioned in the center. Slow and fast rhythms alternate and group weaves varied patterns.The costumes are simple. The upper part of the body is usually left bare while the a black sheet-rug is tied on the lower body over the `dhooti’ or sarong.

Background and History
In all temples of Beereshwara, it is a religious practice that the major instrument Dollu be hung in the premises of the temple by means of a thick thread tied up to the hooks fixed in the ceiling. Every time pooja is offered to Beereshwara, the custom demands that there should be an instantaneous beating of the Dollu as an accompanying act of worship. definition of folk art: Folk art encompasses art produced from an indigenous culture or by peasants or other laboring tradespeople. In contrast to fine art, folk art is primarily utilitarian and decorative rather than purely aesthetic

Kuruba Gowdas sing in his lord Beereshwaras glory, giving an altogether different ring of intonation as distinguishable from the rest of other kinds of folk singers. Their ancestral pride is something, unconditional when they take to singing, tracing the origin of their genealogy, evolution and development over the ages. This expressive literature in its oral tradition goes by the legend called ‘Halumatha Purana’ or Kuruba Purana.

Tradition
Dollu Kunitha has gone on uninterruptedly generation after generation with renewed vigour and raciness of performance. Hardly any religious performance of a ritualistic ceremony or any village festival can ever take place without this dance, especially in North Karnataka. On all these occasions, the Dollu dance becomes the very centre of activity around which other important things get built up. Since this dance demands strength, muscle power and the spirit of endurance, only well-built sturdy persons of enough stamina alone can take to it.

Story of Dollu
A demon Dollasura worshiped Shiva devotedly and Lord Shiva appeared before him and asked him to ask for a boon, Dollasura asked that he should be able to swallow Shiva himself. The boon was granted and Dollasura swallowed Shiva. Shiva started growing big. The asura unable to bear the pain pleaded Shiva to come out. Shiva tore open the demon thus killing him and came out, Shiva used the skin of the asura to make a dollu/drum and gave it to the ganas/rustics to play it.

The Troupe
The troupe consists of about a dozen artistes as dancing partners. Against the background we have tala, tappadi, trumpets, gong and flute, raised to a high-pitched tenor. These instruments are perforce used to reinforce the rich vibrations of Dollu. A miniature model of Dollu, easy to carry in hand, and handle it for beating – is often employed while singing a distinct class of songs-Dollu Songs/Drum Songs. Because there is beating of Dollu here by the fingers.

Other dance forms
Devare Thatte Kunitha, Yellammana Kunitha, and Suggi Kunitha are named after the deity or the symbol or instruments which are balanced on the head or held in the hand of the dancer. The Pata Kunitha, the Gorava Kunitha and the Kamsale are some of the other common ritualistic dances.