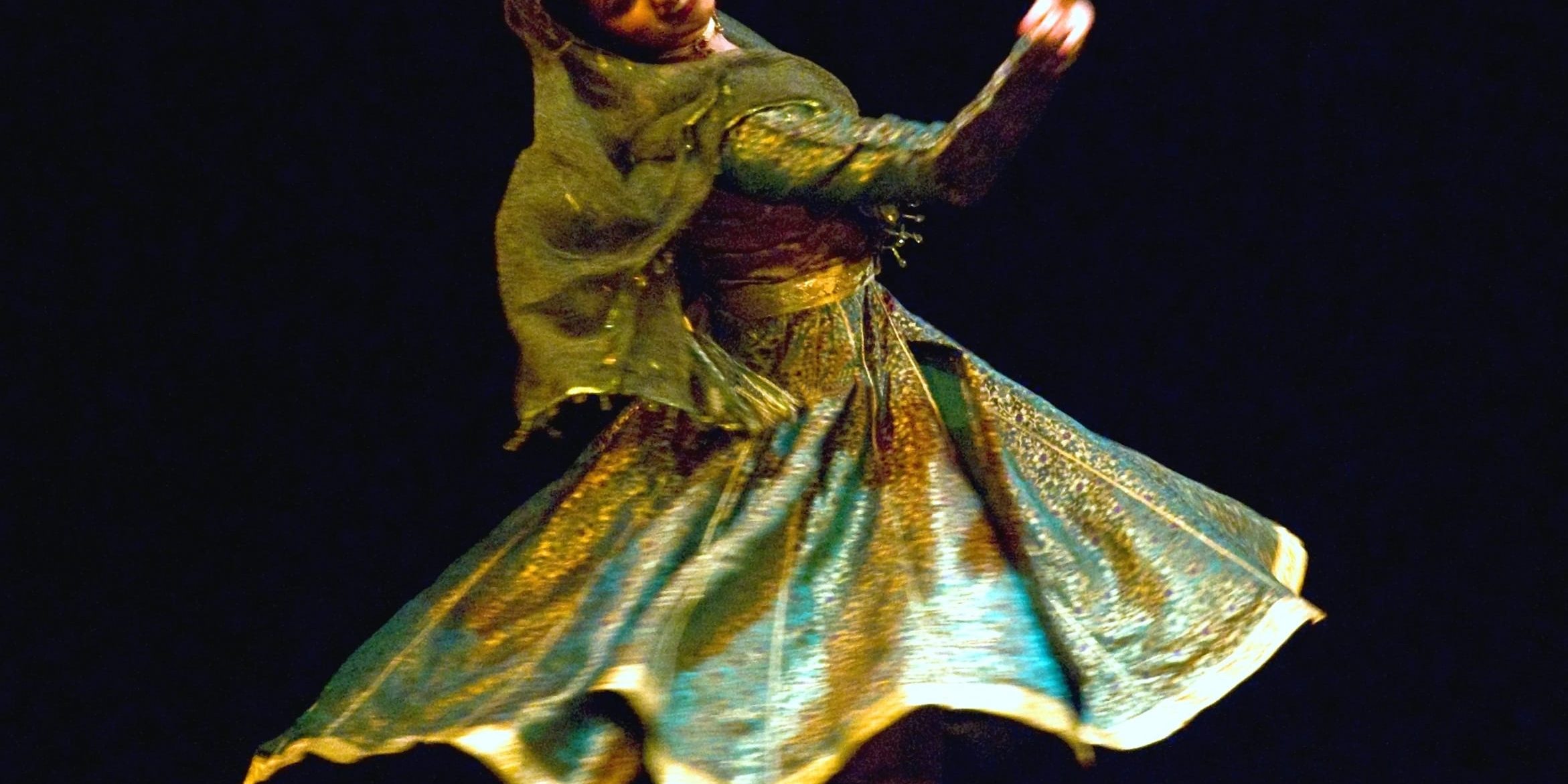 Kathak is one of the eight forms of Indian classical dances, originated from North India. This dance form traces its origins to the nomadic bards of ancient northern India, known as Kathaks, or storytellers. These bards, performing in village squares and temple courtyards, mostly specialized in recounting mythological and moral tales from the scriptures, and embellished their recitals with hand gestures and facial expressions. It was quintessential theatre, using instrumental and vocal music along with stylized gestures, to enliven the stories. Its form today contains traces of temple and ritual dances, and the influence of the bhakti movement. From the 16th century onwards it absorbed certain features of Persian dance and Central Asian dance which were imported by the royal courts of the Mughal era. 2

There are three major schools or gharanas of Kathak from which performers today generally draw their lineage: the gharanas of Jaipur, Lucknow and Benares (born in the courts of the Kachwaha Rajput kings, the Nawab of Oudh, and Varanasi respectively); there is also a less prominent (and later) Raigarh gharana which amalgamated technique from all three preceding gharanas but became famous for its own distinctive compositions.

The name Kathak is derived from the Sanskrit word katha meaning story, and katthaka in Sanskrit means s/he who tells a story, or to do with stories. The name of the form is properly katthak, with the geminated dental to show a derived form, but this has since simplified to modern-day kathak. kathaa kahe so kathak is a saying many teachers pass on to their pupils, which is generally translated, ‘s/he who tells a story, is a kathak’, but which can also be translated, ‘that which tells a story, that is Kathak’.

Pure Dance (Nritta)
The structure of a conventional Kathak performance tends to follow a progression in tempo from slow to fast, ending with a dramatic climax. A short danced composition is known as a tukra, a longer one as a toda. There are also compositions consisting solely of footwork. Often the performer will engage in rhythmic ‘play’ with the time-cycle, for example splitting it into triplets or quintuplets which will be marked out on the footwork, so that it is in counterpoint to the rhythm on the percussion.

All compositions are performed so that the final step and beat of the composition lands on the ‘sam’ (pronounced as the English word ‘sum’ and meaning even or equal, archaically meaning nil) or first beat of the time-cycle. Most compositions also have ‘bols’ (rhythmic words) which serve both as mnemonics to the composition and whose recitation also forms an integral part of the performance. This recitation is known as padhant. Some compositions are aurally very interesting when presented this way. The bols can be borrowed from tabla (e.g. dha, ge, na, ‘ti’ ‘na’ ‘ka’ ‘dhi na’) or can be a dance variety (ta, thei, tat, ta ta, tigda, digdig , tram theyi and so on).

Often tukras are composed to highlight specific aspects of the dance, for example gait, or use of corners and diagonals, and so on. A popular tukra type is the chakkarwala tukra, showcasing the signature spins of Kathak. Because they are generally executed on the heel, these differ from ballet’s pirouettes (which are properly executed on the toe or ball of the foot). The spins usually manifest themselves at the end of the tukra, often in large numbers: five, nine, fifteen, or more, sequential spins are common. These tukras are popular with audiences because they are visually exciting and are executed at great speed. Other compositions can be further particularised as follows:

Expressive Dance (Nritya)
Aside from the traditional expressive or abhinaya pieces performed to a bhajan, ghazal or thumri, Kathak also possesses a particular performance style of expressional pieces called bhaav bataanaa (lit. ‘to show bhaav or ‘feeling’). It is a mode where abhinaya dominates, and arose in the Mughal court. It is more suited to the mehfil or the darbar environment, because of the proximity of the performer to the audience, who can more easily see the nuances of the dancer’s facial expression. Consequently, it translates to the modern proscenium stage with difficulty. A thumri is sung, and once the mood is set, a line from the thumri is interpreted with facial abhinaya and hand movements while seated. This continues for an indefinite period, limited only by the dancer’s interpretative abilities. Shambhu Maharaj was known to interpret a single line in many different ways for hours but all the Maharaj family (Acchan Maharaj, Lachhu Maharaj, Shambhu Maharaj and Achhan Maharaj’s son Birju Maharaj) have found much fame for the naturalness and innovativeness of their abhinaya.

Costume
As the dance style itself has changed to reflect the different milieus in which it found itself, so too has the costume and performance dress of the dancers.

Female costume: Traditional (and perhaps more specifically Hindu) costume sometimes consists of a sari, whether worn in an everyday style, or tied up to allow greater freedom of movement during dance. However, more commonly, the costume is a lehenga-choli combination, with an optional odhni or veil. The lehenga is loose ankle-length skirt, and the choli is a tight fitting blouse, usually short-sleeved. Both can be highly ornately embroidered or decorated. The lehenga is sometimes adapted to a special dance variety, similar to a long ghaghra, so that during spins, the skirt flares out dramatically.

Mughal costume for women consists of an angarkha (from the Sanskrit anga-rakshaka ‘limb-keeper’) on the upper body. The design is akin to a chudidaar kameez, but is somewhat tighter fitting above the waist, and the ‘skirt’ portion explicitly cut on the round to enhance the flare of the lower half during spins. The skirt may also be cut on the round but beginning just below the bust; this style is known as ‘Anarkali’ after the eponymous princess who popularised it. Beneath the top, the legs are covered by the chudidaar or figure hugging trousers folded up giving the look of cloth bangles. Optional accessories are a small peaked cap and a bandi or small waistcoat to enhance the bust-line. A belt made of zari or precious stones is also worn on the waist.

Male costume: The traditional costume for men to be bare-chested. Below the waist is the dhoti, usually tied in the Bengal style, that is with many pleats and a fan finish to one of the ends (although it is not unknown for dancers to tie the garment more simply). There is the option of wearing a men’s bandi too. The Mughal costume is kurta-churidar. The kurta can be a simple one, or again, adapted for dance to incorporate wider flare, but is usually at least knee-length. Men may also wear an angarkha (see Female Costume, above). Particularly older variety costumes include the small peaked cap too.