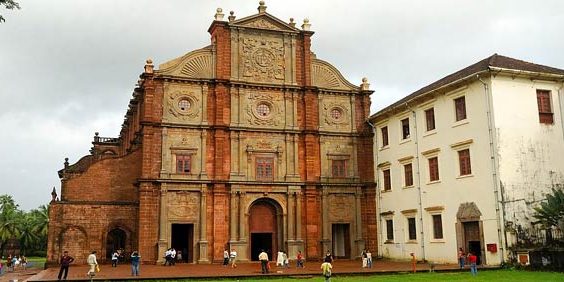 Churches of Goa : Old Goa or Velha Goa is a historical city in North Goa district in the Indian state of Goa. The city was constructed by the Bijapur Sultanate in the 15th century, and served as capital of Portuguese India from the 16th century until its abandonment in the 18th century due to plague. The remains of the city are a UNESCO World Heritage Site.

Goa famous for its fresh seafood cuisine, its people, its churches and temples, but more than anything else, for its beaches. Pale gold sand stretching for miles on end, fringed with coconut palms. Isolated coves separated by cliffs reaching into the sea. The sun, the sand and the surf create an enchanting wonderland, which is simply irresistible.

By Air: The only airport in Goa is the Dabolim Airport, situated at a distance of around 29 km from Panaji on the coast near Vasco da Gama. Most domestic airlines operate in Goa apart from chartered private airlines operating from UK and Germany.
By Rail: It is not difficult to reach Goa by trains, especially after opening of the Konakan Railway that connects Margao and Vasco da Gama to major cities in India. You can take trains from Delhi, Mumbai, and Bangalore to reach Goa comfortably.
By Road: Goa, Maharashtra, and Karnataka state transport corporations operate from the Kadamba bus stand at Panaji. Frank Shipping operates a boat service between Mumbai and Panaji. Moving around in Goa is quite easy. One can find bus as well as car rental services.
Category: World Heritage SitesBy userJune 5, 2016
Share this article
Share on FacebookShare on Facebook TweetShare on Twitter Pin itShare on Pinterest Share on LinkedInShare on LinkedIn Share on WhatsAppShare on WhatsApp