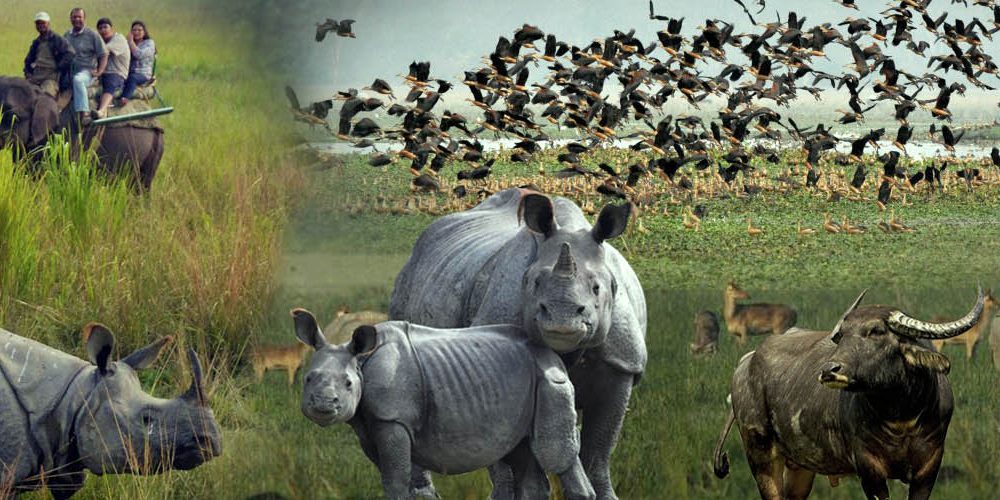 Kaziranga National park is a vast expanse of tall elephant grass, marshland, and dense tropical moist broadleaf forests, crisscrossed by four major rivers, including the Brahmaputra, and the park includes numerous small bodies of water. Kaziranga has been the theme of several books, songs, and documentaries. The park celebrated its centennial in 2005 after its establishment in 1905 as a reserve forest.

Two of the largest snakes in the world, the Reticulated Python and Rock Python, as well as the longest venomous snake in the world, the King Cobra, inhabit the park. Monitor lizard species found in the park include the Bengal monitor and the Water Monitor. Other reptiles include fifteen species of turtle, such as the endemic Assam Roofed Turtle and one species of tortoise, the Brown Tortoise. 42 species of fish are found in the area, including the Tetraodon.

By Air: The nearest airport is situated at Guwahati, which is 217 kms. away from the park. The other airport is located at Jorhat, 97 kms. from Kaziranga.
By Rail: The nearest railhead is Furkating, situated 75 kms. away from Kaziranga National Park.
By Road: The main gate for Kaziranga Wildlife Sanctuary, at Kohora on the National Highway No. 37, consists of a handful of cafes and a small local market. ASTC and private buses stop here on their way to and from Guwahati, Tezpur and Upper Assam.
Category: World Heritage SitesBy userJune 5, 2016
Share this article
Share on FacebookShare on Facebook TweetShare on Twitter Pin itShare on Pinterest Share on LinkedInShare on LinkedIn Share on WhatsAppShare on WhatsApp