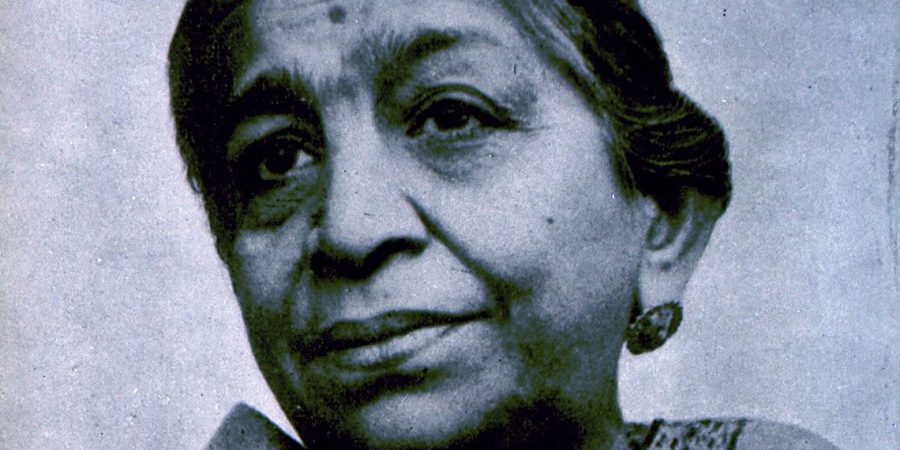 Sarojini Naidu (born as Sarojini Chattopadhyaya) (February 13, 1879, Hyderabad – March 2, 1949, Lucknow), also known by the sobriquet The Nightingale of India was a child prodigy, freedom fighter, and poet. Naidu was the first Indian woman to become the President of the Indian National Congress and the first woman to become the Governor of Uttar Pradesh. She was famously known as Bharatiya Kokila (The Nightingale of India).

She was active in the Indian Independence Movement, joining Mahatma Gandhi in the Salt March to Dandi, and then leading the Dharasana Satyagraha after the arrests of Gandhi, Abbas Tyabji, and Kasturba Gandhi.

Sarojini Naidu was born in Hyderabad, India to a bengali hindu family as the eldest daughter of scientist, philosopher, and educator Aghornath Chattopadhyaya, and Barada Sundari Devi, a poetess. Her father was the founder of the Nizam College, and also the first member of the Indian National Congress in Hyderabad, India, with his friend Mulla Abdul Qayyum. He was later dismissed from his position as Principal and even banished in retaliation for his political activities. Sarojini was an excellent poet too. Naidu’s brother, Virendranath Chattopadhyaya, was also a noted Indian activist. During World War I Virendranath was instrumental in finding the Berlin Committee and was one of the leading figures of the Hindu German Conspiracy. He later became committed to Communism, travelling to Soviet Russia where he is believed to have been executed on Stalin’s orders in 1937. Another brother Harindranath Chattopadhyaya was a playwright, poet and actor.

She passed her Matriculation examination from Madras University at the age of twelve, also being first in the entire Presidency. From 1891 to 1894 she took a break from her studies and was involved in extensive reading on various subjects. In 1895, at the age of sixteen, she traveled to England to study first at King’s College London and subsequently at Girton College, Cambridge.But she had to discontinue her studies and returned to india in 1898 due to various health problems . Sarojini Naidu learnt to speak Urdu, Spanish, Telugu, English, Persian and Bengali. Her favorite poet was P.B. Shelley

In the Freedom struggle

She joined the Indian independence movement, in the wake of the aftermath of partition of Bengal in 1905. During 1903-17 Sarojini came into contact with Gopal Krishna Gokhale, Rabindranath Tagore, Muhammad Ali Jinnah, Annie Besant, C. P. Ramaswami Iyer, Mohandas Gandhi and Jawaharlal Nehru.
From 1915 to 1918 she lectured all over India on welfare of youth, dignity of labour, women’s emancipation and nationalism. After meeting Jawaharlal Nehru in 1916, she took up the cause of the indigo workers of Champaran. In 1925 she was elected as the President of the Congress, the first Indian woman to hold the post.
In March 1919, the British government passed the Rowlatt Act by which the possession of seditious documents was deemed illegal. Mohandas Gandhi organized the Non-Cooperation Movement to protest and Naidu was the first to join the movement which the government worked to suppress.
In July 1919, Naidu became the Home Rule League’s ambassador to England. In July 1920 she returned to India and on August 1, Mahatma Gandhi declared for the Non-Cooperation Movement. In January 1924, she was one of the two Indian National Congress delegates at the East African Indian Congress.
Naidu arrived in New York in October 1928 and was concerned with the unjust treatment of the African Americans and the Amerindians. Upon her return to India she became a member of Congress Working Committee.
On January 26, 1930 the National Congress proclaimed its independence from the British Empire. On May 5, Mohandas Gandhi was arrested. Naidu was arrested shortly thereafter and was in jail for several months. She, along with Gandhi, was released on January 31, 1931. Later that year, they were again arrested. Naidu was eventually released due to her poor health and Gandhi was released in 1933. In 1931, she participated in the Round Table Summit, along with Gandhiji and Pundit Malaviyaji. On October 2, 1942, she was arrested during the “Quit India” protest and stayed in jail for 21 months with Gandhiji. Naidu shared a warm relationship with Mohandas Gandhi, even calling him “Mickey Mouse”.
At the Asian Relations Conference of March 1947, Naidu presided over the Steering Committee. On August 15, 1947, with the independence of India, Naidu became the Governor of the United Provinces (presently Uttar Pradesh), India’s first woman governor and she died in office following a heart attack on March 2, 1949.