You are here:
Scientists 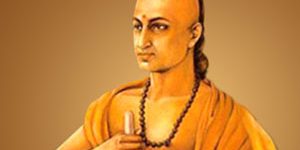 Chanakya c. 350–283 BCE) was an adviser to the first Maurya Emperor Chandragupt (c. 340–293 BCE), and was the chief architect of his rise to power. Kautilya and Vishnugupta, the names by which the ancient Indian political treatise called the Arthasastra identifies its author, are traditionally identified with Chanakya. Chanakya has been considered as the pioneer of the field of economics and political science.In the Western world, he has been referred to as The Indian Machiavelli, although his works predate Machiavelli’s by about 1,800 years. He was a teacher in Taksasila, an ancient centre of learning, and was responsible for the creation of Mauryan empire, the first of its kind on the Indian subcontinent. His works were lost near the end of the Gupta dynasty and not rediscovered until 1915.