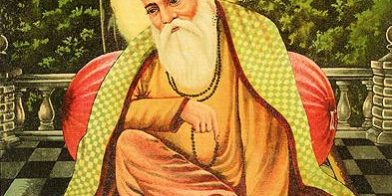 Shri Guru Nanak Dev ji was the founder of the religion of Sikhism and the first of ten Sikh Gurus.was born in the village of Talwandi, a village in the Sheikhupura district, 65 kms. west of Lahore. Nanak’s father was Mehta Kalu Chand, known popularly as Kalu. He was the accountant of the village. He was an agriculturist also. Nanak’s mother was Tripta.

He was born to a simple Hindu family. His father Mehta Kalian Das was an accountant in the employment of the local Muslim authorities. From an early age Guru Nanak made friends with both Hindu and Muslim children and was very inquisitive about the meaning of life. At the age of six he was sent to the village school teacher for schooling in reading and writing in Hindi and mathematics. He was then schooled in the study of Muslim literature and learned Persian and Arabic. He was an unusually gifted child who learned quickly and often question his teachers. At age 13 it was time for Guru Nanak to be invested with the sacred thread according to the traditional Hindu custom. At the ceremony which was attended by family and friends and to the disappointment of his family Guru Nanak refused to accept the sacred cotton thread from the Hindu priest. He sang the following poem;

“Let mercy be the cotton, contentment the thread, Continence the knot and truth the twist. O priest! If you have such a thread, Do give it to me. It’ll not wear out, nor get soiled, nor burnt, nor lost. Says Nanak, blessed are those who go about wearing such a thread” (Rag Asa)

Nanak married Sulkhni of Batala, and they had two sons, Sri Chand and Lakhmi Das. Guru ji’s brother-in-law, the husband of his sister Nanki, obtained a job for him in Sultanpur as the manager of the government’s grainary. One morning, when he was twenty-eight, he went as usual down to the river to bathe and meditate. It was said that he was gone for three days. When he reappeared, filled with the spirit of God, it was apparent to all that he was a changed man. He would say nothing, he quit his job and distributed all that he had to the poor. Accompanied by his childhood friend, a Muslim named Mardana who had always played the Rebab while Nanak sang, they left town. When, after a few days, he spoke saying “There is no Hindu, no Musalman.” It was then that Guru Nanak began his missionary work and travels.

During the four journeys, Guru Nanak Sahib visited different religious places preaching Sikhism. He went to Kurukshetra, Haridwar, Joshi Math, Ratha Sahib, Gorakh Matta (Nanak Matta), Audhya, Prayag, Varanasi, Gaya, Patna, Dhubri and Gauhati in Assam, Dacca, Puri, Cuttock, Rameshwaram, Ceylon, Bidar, Baroach, Somnath, Dwarka, Janagarh, Ujjain, Ajmer, Mathura, Pakpattan, Talwandi, Lahore, Sultanpur, Bilaspur, Rawalsar, Jawalaji, Spiti Vally, Tibet, Ladakh, Kargil, Amarnath, Srinagar and Baramula. Guru Nanak Sahib also paid visit to Muslim holy places. In this regard he went to Mecca, Medina, Beghdad via Multan, Peshawar Sakhar, Son Miani, Hinglaj etc. Some accounts say that Guru Sahib reached Mecca by sea-route. Guru Sahib also visited Syra, Turkey and Tehran (the present capital of Iran). From Tehran Guru Sahib set out on the caravan route and covered Kabul, Kandhar and Jalalabad. The real aim of the tour was awakening the people to realise the truth about God and to introduce Sikhism. He established a network of preaching centres of Sikhism which were called “Manjis”. He appointed able and committed followers as its head (preacher of Sikhism). The basic tenents of Sikhism were wilfully conceived by the people from all walks of life. The seeds of Sikhism were sown all over India and abroad in well-planned manner.

Nanak settled down at Khartarpur towards the close of his life. His whole family lived there together for the first time. Houses for the dwelling of Nanak’s family and a Dharmashala were also built. Mardana also lived with the Guru. Every day the ‘Japji’ and ‘Sohila’—the morning and the evening prayers composed by Guru Nanak—were recited in his presence. Guru Nanak died in the year 1538 A.D. at the age of sixty-nine. Guru Angad succeeded Guru Nanak. The other Gurus are: Guru Amardas, Guru Ramdas, Guru Arjun Dev, Guru Hargovind, Guru Har Rai, Guru Har Krishan, Guru Tej Bahadur and Guru Gobind Singh.